Lessons from a Kenyan slum 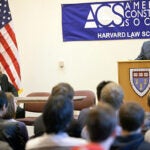 Talent is universal, but opportunity is not

NAIROBI, Kenya — From nearly anywhere in this teeming capital city of Kenya, you can see its greatest embarrassment: Kibera, a 1.5-square-mile slum of steel-roof shanties and narrow, undulant alleys of mud, dust, litter, and open sewage. It’s Africa’s largest informal urban settlement, home to upwards of a million people. Most residents live there on less than $2 a day.

But Kibera’s 13 informal villages are also places of vitality, color, and enterprise. A Harvard Business School case study, revised last year and being taught in a November class, captures the slum’s incongruent poverty and vigor.

“Kibera,” wrote co-authors Kathleen L. McGinn and Cailin B. Hammer, “was, at its essence, a vital, overcrowded community where families and friendships thrived alongside hunger and disease.” (McGinn is Cahners-Rabb Professor of Business Administration. Hammer is a freelance writer.)

More than enterprise is incongruent about Kibera. At one edge of it stand the French embassy and the house of a former Kenyan president. From inside the slum, you can see distant busy roadways glittering with traffic along Kibera’s bowl-like edges. Across a road is Nairobi National Park, a small game reserve where tourists and schoolchildren can glimpse iconic wild Africa.

Kibera represents another iconic Africa — a concentration of urban poverty that most Nairobi residents would rather forget, deny, or at least never visit. “I’ve never been there,” said one cab driver with a shake of his head.

It was to this isolated, ignored Kibera that Rye Barcott, M.B.A./M.P.A. ’09, first traveled in the summer of 2000. He was a 20-year-old student with a smattering of Swahili, in search of both adventure and information for a thesis project at the University of North Carolina.

By the next summer, Barcott had moved his sights from adventure to empathy. He had acquired a bedrock insight: that among the poor talent is universal, but opportunity is not.

Barcott was a U.S. Marine officer from 2001 to 2006, an experience he views as a variation on his nonprofit work. He described this clash and confluence of two worlds in a memoir, “It Happened on the Way to War: A Marine’s Path to Peace” (Bloomsbury, 2011). One BBC reviewer called the book “an ax for the frozen sea of the heart.”

“Harvard gave me an opportunity few people have, and that few veterans have,” said Barcott this summer in Nairobi, “an extraordinary environment where you have an opportunity for structured reflection on a particularly intense set of life experiences.” With Harvard historian Ernest R. May as a mentor, he set down the military half of his story while it was still “vivid, fresh, and immediate.” (May died the month Barcott graduated.)

CFK was the rest of the story, including its humble beginnings, its ascendant history, and its present challenges. The nonprofit is also the core subject of the Kibera case study being taught Nov. 9 by Amy J.C. Cuddy, an assistant professor at HBS. Barcott will be in class that day.

“The Business School experience was a really powerful way of learning essentially a new language,” he said, “new practices and new tools to apply to complex problems.”

While at Harvard, Barcott held a Catherine B. Reynolds Foundation Fellowship in Social Entrepreneurship through the Center for Public Leadership. That gave him an inner sanctum, he said, “a community of diverse, interesting people who are trying to take on problems that matter.”

Part of taking on problems that matter is finding a bigger audience for the big messages. His book tour involved 110 presentations in 40 cities. Next is “our larger call to action,” said Barcott, an Internet CFK challenge started this fall as “the power of 26.”

To him, 26 is a magic number. It was $26 that Barcott donated as a 20-year-old to Festo, the unemployed Kibera nurse who a year later had turned a business selling vegetables into a 24-hour health clinic. Even today, $26 — the price of four beers in America — can go a long way in a Kibera

Then there is the power of the program’s 26 thought-provoking challenges, such as “No. 6: After dark, do everything by candlelight,” and “No. 9: Try to live on $2 a day.” Others are not so severe, but still evoke Kibera’s sense of community. One example: “Tonight, make dinner for a neighbor.”

In Nairobi in July, Barcott dove into the hubbub of CFK’s 10th anniversary party, a day of parades, music, and dancing at a Kibera soccer field. For the occasion, he wore a black T-shirt with CFK’s motto in gold letters: “Be a light.”