Harvard, then and now 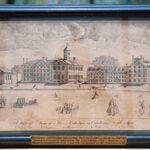 In his poem “Little Gidding,” T.S. Eliot, Class of 1909, wasn’t talking about Harvard when he wrote “We shall not cease from exploration / And the end of all our exploring / Will be to arrive where we started / And know the place for the first time.” But the sentiment behind his verse serves as a perfect leitmotif for the book “Explore Harvard.”

Published to commemorate Harvard’s 375th anniversary, “Explore Harvard,” a collection of contemporary and historical photographs, showcases the myriad intellectual exchanges that make the University one of the world’s leading institutions of higher education.

“We wanted to gather together a collection of images that touched on the University’s past, but also showcased the present-day face of Harvard,” said Christine Heenan, vice president for Harvard Public Affairs & Communications. “This volume shows the incredible reach of the institution, from students immersed in the arts to researchers at work around the globe.”

In his introduction to the book, poet luminary Seamus Heaney writes that “brio and commitment shine off these pictures, whether of students serving on outreach programs in Africa or enjoying themselves near home, splashing through muddy puddles in the Yard; whether watching or playing in ‘the Game’ with Yale or dining in splendor in Annenberg Hall.”

Heaney, who taught at Harvard from 1982 to 1996, also composed “Villanelle for an Anniversary” to mark Harvard’s 350th anniversary. “From the moment I read that poem to the mighty assembly at that year’s Commencement,” he writes, “my sense of relationship with Harvard deepened to the point where I feel immediately at home with this beautiful, bountiful cornucopia of images …”

“Explore Harvard” features the photographic work of Harvard staff photographers Jon Chase, Justin Ide, Rose Lincoln, Stephanie Mitchell, and Kris Snibbe. “None of us went to the College,” Mitchell said, “but each of us has spent over a decade here and has a fondness for and familiarity with the University.”

Verses by acclaimed Harvard poets — from former students like Eliot and Margaret Atwood, to professors like Jorie Graham — open each of the chapters, which are categorized thematically and feature everything from wide vistas to the small details of Harvard.

“Poetry and photography are a natural pairing,” said Mitchell, who took the lead in selecting the images and the verse. “Each condenses a thought, an image, and evokes a mood, expresses an emotion or an aesthetic, and speaks of greater truths.”

One of Mitchell’s favorite photographs is a backstage shot at the Hasty Pudding Theatricals. A blond youth uses a cotton swab to carefully apply fantastical makeup — the annual production is famous for its undergrads in drag — in front of a lighted mirror that also houses the wigs he’ll don for the night. On the opposite page, an archival image of a Hasty Pudding performer from 1886 contrasts the contemporary perspective. The student wears a long, Victorian-esque dress, dark elbow-length gloves, and a white curled wig, with an added fan for dramatic flair.

Mitchell relished the task of sequencing of the images, “comparing modern and historic, pairing photographs with similar compositions, or related themes,” she said.

The cover image, by colleague Rose Lincoln, “was taken last year,” said Mitchell, “but it looks like it could’ve been a moment out of Wallace Stevens’ time at Harvard, so it bridges the two time periods.”

Mitchell also loves a set of photographs at the Lowell House opera. The behind-the-scenes glimpse at the student actors in “Tosca” “feels like a Fellini set,” said Mitchell.

“We have this intimate access to Harvard. We’re not just photographing what’s happening; we’re really integrated with the University. We get to see a lot of things that a lot of people don’t.”

The Gazette photographers will participate in a panel discussion on Oct. 13 at the Harvard Coop, 6 p.m. On Nov. 3, a gallery display and panel discussion will take place at the CGIS Gallery, featuring a reception at 5 p.m., with comments to follow.