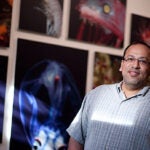 Gauging the effects of the BP spill

Fourteen Harvard surgeons, supported by 36 anesthesiologists, radiologists, nurses, and other medical personnel at Harvard-affiliated Brigham and Women’s Hospital (BWH), last week worked for 12 hours to give a new pair of hands to a 65-year-old Revere man who lost both arms below the elbows and both legs below the knees as a result of a septic infection in 2002.

“This latest milestone reflects the commit and dedication” of BWH “to continuing to expand the boundaries of what is possible in transplantation,” Elof Eriksson, Harvard Medical School’s Joseph E. Murray Professor of Plastic and Reconstructive Surgery and the chief of plastic and reconstructive surgery at BWH, said at a press conference today announcing the Brigham team’s second successful bilateral hand transplant.

In prepared remarks, transplant recipient Richard Mangino said, “In thinking about what I wanted to say today, two words kept coming to my mind: gratitude and miracles.

“When I survived the devastating infection that took my limbs, people said it was a miracle,” Mangino said. “When I taught myself how to put on my prostheses and continued to do things like paint and mow the lawn, people said I was a miracle. When I began providing instruction to others who had lost limbs, to teach them what I had learned and how I did things … that felt miraculous. But the one miracle I have prayed for, since my oldest grandson Trevor was born, was to be able to feel the sense of touch again … to touch his and Nicky’s little faces, and stroke their hair, and to teach them to throw a ball. To me, that would be a miracle. … My miracle has come true.”

Brigham and Women’s has long been a leader in transplantation: In 1954, the hospital was the site of the first successful human organ transplant, a kidney procedure performed by Joseph Murray, now an HMS emeritus professor of surgery, who in 1990 received the Nobel Prize in physiology or medicine for his pioneering work in transplantation.