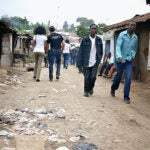 Lessons from a Kenyan slum

In February, Jason Beckfield was named a full professor of sociology at Harvard, where he had labored in the junior faculty trenches for five years.

“It was a relief you cannot imagine,” said Beckfield, a modest, rangy 35-year-old and the father of two, “an instantaneous lowering of blood pressure.”

Beckfield got his introduction to sociology at Northeast Missouri State University (now Truman State University), where his favorite professor barked out brilliant lectures and often showed up in class still dressed for duck hunting. Said Beckfield of Harvard, “This is not the place I expected to land.”

Yet his academic path was remarkable and lucky, said Beckfield, beginning with the public schools in his native Joplin, Mo. “At every grade,” he remembered, “I was fortunate to have very good teachers.” Most of all, there was the steadying influence of his parents — the late Albert Beckfield, an accountant, and his wife Cathy, a bank loan assistant.

Despite solid academics in Joplin, Beckfield was a freshman in college before he had heard of sociology. He took a memorable survey course taught by Jack Mitchell, the duck hunter. “He was extremely intimidating,” he said of the man who was to inspire a life’s work. “He was big man — gruff, severe, and a compelling lecturer.”

Beckfield sampled English, biology, astronomy, anthropology, and journalism. But the siren call of sociology won. Mitchell left his young student with a senior-year gift: intensive seminars in classic and contemporary social theory that gave him an exceptional grounding for the Ph.D. program at Indiana University. “I still have those notes,” said Beckfield.

He spent one of his seven doctoral years helping his adviser, Professor Art Alderson, complete an intensive social network analysis of selected cities around the world. “It was a very important moment in graduate school,” said Beckfield. “It completely changed the way I thought about globalization.”

Social network analysis is the complex, data-driven study of how nodes (individuals) and ties (relationships) relate to one another. Conceptually, this key analytical tool dates to the 1930s, but it only took off in the ’90s, when computing power could finally cope with massive data sets. Beckfield is a fan of the technique’s fluid intersections with physics, neuroscience, statistics, and other disciplines.

The complex equations and fulsome quantitative data of social network analysis underlie his chief research: regionalization initiatives like the European Union (EU). Entities like the EU are increasingly common – new economic, political, and social hybrids of national and global ties. In a book he will finish writing this year, Beckfield wonders: Does the EU, for one, create patterns of inequality?

“The political and economic fates of a large number of people are increasingly bound up in regions,” he said. “We should be paying a lot more attention than we are.”

It’s all so new. Beckfield called regional unions like the EU “supranational entities” that are “completely fascinating society-building experiments.”

Among those EU-like experiments are the Common Market of the Southern Cone, the Association of Southeast Asian Nations, and the Economic Community of West African States. The one anomaly is the North American Free Trade Agreement, said Beckfield, since it is based on “economic integration without political integration.”

While regional models of interchange knit together fresh alliances, the old order of nation-to-nation interchange is unraveling. “The factors that influence people’s lives are less coupled to the nation-state than they were before,” said Beckfield, describing a global sea change that Columbia University sociologist Saskia Sassen calls “denationalization.” (She and Beckfield were colleagues at the University of Chicago, where he first taught.)

In the face of these changes, it’s important to conceptualize “what regionalized forms of social organization look like,” said Beckfield, and to understand what it means for “a nation-state to be integrated into something that exists above it.”

The idea of globalization helps us understand grand patterns, said Beckfield. But it is more accurate to think of the world as a place of multiplying supranational regions: densely woven networks of social, economic, and political ties that exceed national boundaries.

The world is not the globalized “flat world” popularized by writer Thomas Friedman, said Beckfield. “The metaphor I like better — it’s not my own — is that the world is ‘spiky,’ increasingly fragmented and increasingly unequal.”