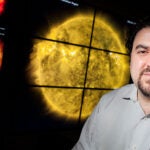 A tool to touch the sun

As John Briscoe tells the story, it was President John F. Kennedy who got Harvard water experts involved in Pakistan’s agricultural crisis in the 1960s.

When Pakistan’s president complained about that arid nation’s water problems, Kennedy, looking for a way to help that didn’t involve military commitments, said, “I think we have some guys up in Cambridge who can help you.”

In response to Kennedy’s call, the renowned Harvard Water Program applied scientific analysis, supplemented with an interdisciplinary understanding of economics, policy, and politics, to come up with a solution that worked for Pakistan: using groundwater to augment the river water already transported through canals.

Today, as world leaders cast worried eyes on forecasts of increasingly strained fresh water supplies, there again are experts in Cambridge who can help, and who are already tackling some key challenges. In fact, Harvard has an array of programs and laboratories pointed at aspects of this critical long-term problem that is likely to become more vexing, given that the world’s population just surpassed 7 billion.

Briscoe’s Harvard Water Security Initiative is one of the University initiatives that are attacking fresh water concerns and that are, in some ways, successors to the Harvard Water Program. Briscoe, who worked on water projects for governments and the World Bank for decades before joining Harvard in 2009, says the University’s strength comes in its ability to draw expertise from across many fields.

Elsewhere, at the Harvard School of Engineering and Applied Sciences (SEAS), Chad Vecitis, assistant professor of environmental engineering, is employing advanced methods to treat water through nanotechnology. Peter Rogers, Gordon McKay Professor of Environmental Engineering, recently addressed the future of water in his book, “Running Out of Water: The Looming Crisis and Solutions to Conserve Our Most Precious Resource.”

At the Center for International Development, the Sustainability Science Program has made water use in China one of its research focal points. And the Carr Center for Human Rights Policy is examining the benefits of using a “rights” approach to help ensure access to clean drinking water and adequate sanitation around the globe.

At the Harvard School of Public Health (HSPH), James Shine, senior lecturer on aquatic chemistry, is examining aqueous ecosystems, where metal pollutants move and accumulate. Epidemiologists and those seeking to improve humanitarian relief understand that water is both a basic human need and a potential route of contamination by major diseases, such as cholera.

Beyond health and engineering, faculty members across the University in fields as diverse as law, business, government, and design are examining aspects of the planet’s limited fresh water. Interfaculty collaboration is aided by the Harvard University Center for the Environment, which facilitates cross-faculty cooperation and environmental education through grants, fellowships, and events.

Locally, Harvard’s involvement with water issues includes students, many of whom will take public leadership roles in the years to come. Harvard classrooms present an array of related topics, from the Graduate School of Design’s (GSD) classes on water, aquatic ecology, and land-water linkages, to Harvard Kennedy School’s (HKS) class on water and development, to Harvard Law School’s (HLS) course on environmental law.

Students often study water issues both inside and outside the classroom. Laila Kasuri, an undergraduate engineering concentrator, participated in a project in Pakistan led by Briscoe last summer. Kasuri was part of a multidisciplinary team that included students from SEAS, HKS, and HLS who examined Pakistani water policy and how it relates to usage there.

“It was really eye-opening,” Kasuri said. “As an undergraduate, we have a tendency to say, ‘Oh, I read about this, so I know about it.’ … It teaches you to take everything with a grain of salt.”

Harvard has been bound to water since its earliest days, when the Charles River provided transportation to colonial leaders who formed the College just 16 years after the Pilgrim ship Mayflower landed at Plymouth. Over the years, the river played a key role in Harvard’s growth, serving as a highway to the campus.

The iconic Charles took center stage last weekend when crews from dozens of countries gathered for the Head of the Charles Regatta, the world’s largest two-day rowing event, and one in which Harvard rowers had an extremely successful showing, winning the Championship Eights event and placing first among collegiate crews in both women’s eights and men’s lightweight eights. They won those titles on a river that has become dramatically cleaner in recent decades.

Harvard rowers have long turned to the water for recreation, competition, and even inspiration, said crew coach Harry Parker, who has coached University crews to victory for more than 40 years. Parker, who spends several hours a day on the river, six days a week, 40 weeks a year, said his love affair with the river is shared with many students. Between intercollegiate teams, House squads, and recreational rowers, at least 500 members of the Harvard community row the Charles each year, he said.

“I think it’s fair to say that Harvard’s image is connected to the river. People outside of Boston who think of Harvard think of it being on the river,” Parker said. “It’s not such a bad place to be. It’s a lot better to be on the river looking at the traffic on Storrow Drive than the other way around.”

Above the banks of the Charles, life-sustaining water flows through Harvard’s thousands of pipes and spigots, most grandly through three 50-foot-high waterfalls atop the Science Center, part of the University’s cooling infrastructure. There is also campus concern over its increasing scarcity. As with energy and construction, water conservation is part of the burgeoning effort to make Harvard green.

Many Harvard buildings have installed low-flow toilets, aerators, and showerheads. Harvard University Housing, for example, has put in low-flow aerators and showerheads in its nearly 3,000 residential units, and Harvard Dining Services installed new dishwashers that save 1.5 million gallons per year. The Office for Sustainability partners with student and employee green teams across the University to plan and implement water-saving initiatives and outreach campaigns.

“These and other steps have significantly reduced water consumption, and we’re continually looking for new opportunities to save even more,” Hogarty said. “Harvard has pledged to take an aggressive approach toward improving environmental sustainability, and Campus Services shares this commitment.”

Research on quantity and quality

A 2009 report sponsored by a group of major corporations, including Coca-Cola and Nestlé, projected that global water demand will grow as much as 40 percent in the next 20 years. The projections come as experts warn of aquifers being drained faster than they can be replenished, as biologists recognize that dam building and river diversion harm natural ecosystems, and as climate change projections predict changing rainfall patterns and  melting glaciers that feed major rivers.

Briscoe, the Gordon McKay Professor of the Practice of Environmental Engineering at SEAS and professor of the practice of environmental health at HSPH, focuses on “the questions that keep the strategic leaders in countries up at night.” In the wake of last year’s devastating Pakistan floods, his analysis was both blunt and counter to the prevailing environmental current: Build more dams.

The Harvard Water Security Initiative has formed partnerships with some key nations — Brazil, Pakistan, Australia, as well as the United States — bringing interdisciplinary focus to major water concerns in each country. An example of this collaboration is a nine-month project with law Professors Jody Freeman and Richard Lazarus that examines the management of large rivers. At the heart of this project is an innovative approach to learning. Five teams of six students each from HLS, SEAS, HSPH, HKS, the Faculty of Arts and Sciences, and the College will conduct research with “thinking practitioners” along the Colorado, Indus, Mississippi, Murray-Darling, and São Francisco rivers, visiting their basins in January.

The world’s water future is not just about quantity but also quality. At SEAS, Vecitis is exploring the use of nanotechnology to purify supplies. Vecitis’ research is investigating polymer membranes, carbon nanotubes, and ultrasonic blasts to clean water. The carbon work uses nanotubes to create a microscopic mesh that acts as a filter, with pores small enough to trap not only pathogens but also contaminants. An advantage of using such nanotubes is that they conduct electricity so that electrochemistry can destroy contaminants and inactivate pathogens.

At the Faculty of Arts and Sciences’ Economics Department and at HKS, Michael Kremer, Gates Professor of Developing Societies, approaches the same problem from a different angle. Kremer works on boosting access to water treatment to reduce global deaths from diarrhea. Kremer has evaluated Kenyan programs of the nonprofit group Innovations for Poverty Action, which distributes purification solutions for free directly at the sources where local residents get their water. Such treatment solutions cost less than 50 cents per person per year, so wide-scale usage would be an extremely cost-effective public health measure, Kremer said.

“Approximately 2 million people die of diarrhea each year, and water contaminated with fecal organisms is a major cause. … Less than 10 percent of people purchase water treatment when it is marketed to households, but when free access is provided through a dispenser at the water source, the majority of people treat their water,” Kremer said.

Water as a human right

This week, the center convened a special roundtable meeting with Catarina de Albuquerque, the U.N. Special Rapporteur on the Human Right to Safe Drinking Water and Sanitation. The goal is to develop a collaborative research agenda with scholars from various academic disciplines, as well as practitioners, to understand better how to translate a human right to water and sanitation into practice — and ultimately to provide nations with guidance for their development priorities.

Carr Center Fellow Sharmila Murthy said that treating access to water and sanitation as a human right is important because of the way such rights are handled in the international legal system. Conferring such status would provide moral recognition that water is an essential human need whenever nations ponder development.