Beyond the kitchen, to the B-School 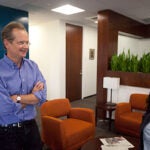 Famous chef seeks students’ ideas for his next venture

When Ferran Adrià, widely considered one of the most innovative chefs in the world, announced the closing of his Spanish restaurant, elBulli, earlier this year, foodies at Harvard and elsewhere mourned. Now, Adrià is coming to them — and asking for ideas.

The man who made pasta from Parmesan, caviar from melons, and ice cream from foie gras — who invented and popularized the molecular gastronomy craze — now wants to transform his shuttered restaurant into something new and unexpected. To create his elBulli Foundation, Adrià is turning to another group of innovators for help: Harvard Business School (HBS) students.

“Harvard is the first university in the world that has understood the importance of cooking,” Adrià, who has spoken in Harvard’s Science and Cooking Public Lecture Series, said via a translator. “They realize that cooking is an amazing language to explain many disciplines, [and] they’re using cooking as a language for teaching new ideas.”

Now Adrià is bringing cooking to the other side of the river, in the hope that HBS students will be able to best his ideas for his new foundation. Adrià visited the Harvard Innovation Lab on Thursday to meet with HBS professors, local media, and more than 100 M.B.A. students eager to hear the details of his new contest.

Adrià, in partnership with Spanish telecommunications giant Telefónica, is launching the Global Ideas Challenge Competition, which is open to M.B.A. students from five top business schools. (In addition to HBS, the roster includes Columbia Business School, ESADE Business School in Spain, London Business School, and the Haas School of Business at University of California, Berkeley.)

The elBulli Foundation will work to forward his gastronomic innovations, but Adrià hopes it will be a workshop for sustainable energy and technology development, too. He wants designers, philosophers, architects, and cooks to be involved.

Students who choose to compete will submit business plans for the foundation that cover nearly every element of the operation, said Roberto Álvarez del Blanco, a marketing expert traveling with Adrià. Students should explore concepts for the foundation’s identity and personality, as well as approaches to garnering financing, fundraising, sponsorships, and relationships and collaborations with other institutions.

Student teams can submit their plans beginning in April. The three finalist teams will travel to the elBulli Foundation in Roses, Costa Brava, Spain, in June for the final competition. Cash prizes will be available to the first-, second-, and third-place teams.

Adrià offered some insights into his creative process — and his reasons for closing elBulli, his famously uncompromising (and ultimately unprofitable) restaurant on the Spanish coast known for serving meals of more than 30 courses and for being open only half the year.

“I was so fed up with people asking me for a table,” he said. The restaurant received more than a million reservation requests a year. “It was horrible,” he said. But Adrià also felt it was time to move on and find bigger fish to fry (or more likely, to freeze into fish popsicles).

“The system does not accept success for too many years,” he said of elBulli’s reputation. “For 15 years, we won the Oscar every year, and people didn’t want to hear about it anymore.”

In finding collaborators for his new foundation, as he did in his kitchen, Adrià said he looks for creativity above all else. “There’s no compassion here. You’ve got to be creative,” he said.

“Sometimes people put creativity like it’s too high, like it’s God-given,” he added. “The important thing is that you do things, lots of things.”

Adrià toured the Innovation Lab, which will hold its official opening ceremony Nov. 18.

“We’re very happy to be in this building,” Adrià said. “Our project is the same thing as this but related to cooking. It’s a project of creativity and innovation where the language is cooking.”

Adrià also dined on roast beef and potatoes, which he deemed “perfect.”

“Imagine the stress of ordering food for him,” said Michael Norton, HBS associate professor and Marvin Bower Fellow, who wrote a business case study on elBulli in 2009 and who helped show Adrià around campus.

Adrià will return to Harvard — “a home away from home” — Nov. 26 through Dec. 6 to offer classes on creativity and innovation. He will speak in the Science & Cooking Public Lecture Series on “The New Culinary Think Tank: elBulli 2.0” Dec. 4.

In the meantime, he will return to Spain to work on his own plan for the elBulli Foundation. He warned M.B.A. students they’d better get to work.

“I’m going to start competing against you,” he said.