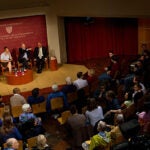 With the world’s population poised to pass an estimated 7 billion later this month, the executive director of the United Nations Population Fund (UNFPA) said Wednesday that it is critically important to step up efforts to educate girls and engage young people.

Babatunde Osotimehin, who was named UNFPA executive director in January, said that problems stemming from population growth are actually issues of consumption, distribution, and equity, not necessarily intrinsic to the number of people alone.

Though the population is expected to surpass 7 billion on Oct. 31, Osotimehin said that all of those people, if standing shoulder to shoulder, could fit within the confines of Los Angeles. If an effort is made to ensure that a young man raised in fast-growing Tanzania gets a good education, understands the importance of the environment, and lives sustainably,  that may create a different global future than if that same man were raised to want everything that someone in a developed nation like Denmark has, which would multiply humankind’s environmental footprint enormously.

Osotimehin spoke at the Harvard Center for Population and Development Studies, where he was a fellow in 1996 and 1997. He described a world that will be transformed in the next few decades. By midcentury, the global population is expected to hit 9 billion, with 70 percent living in cities. The list of megacities, with populations over 10 million, is expected to grow rapidly, straining infrastructure and swelling slums.

Though the world’s present growth rate has slowed from 20 years ago, the sheer numbers of humans having babies ensures that the population will continue to climb. The fastest-growing countries are in Africa and Asia. In those nations, young people are making up larger percentages of the population, yet Osotimehin said that national resources aren’t targeted to their needs proportionately. In Kenya, for example, 85 percent of the population is under 35, yet the nation doesn’t spend near 85 percent of its budget on their needs.

Young people are critical to these countries’ future, he said, and nations should pay attention to them, particularly through education, to ensure they are engaged and participate in society.

“We have to ask ourselves how to engage with young people and make them equal partners in the future of the country,” Osotimehin said.

One segment of the young population that is particularly important is young women and girls, Osotimehin said. In many of the fastest-growing nations, girls have few choices. They’re poorly educated, are married off while teenagers to begin a life of childbearing, and don’t participate fully in the economy.

Ensuring that those girls get a secondary education, he said, will not only delay their childbearing years but will give them a greater chance of participating more fully in society.

Gender-based violence is another pressing issue, Osotimehin said, and widely underreported. He told of a visit to a refugee camp on the Kenya-Somalia border in which he interviewed groups of boys and girls separately. The boys were educated, had access to the Internet, and, though they worried about their futures, weren’t in particular danger. The girls he interviewed, however, stayed mainly silent, with one girl doing the talking. Many had suffered sexual attacks, and fear kept all but two of the 20 from attending school.

“It comes down to the status of women in our country. What do women mean to us? What do girls mean to us?” Osotimehin said.

While much of his talk focused on the growing population of young people, he also said the world has to pay attention to its elderly. The world’s population growth has been boosted as much by lengthening life expectancy as by the increase in young people, he said. Nations have to ensure they have ways to care for their elderly. China’s population is rapidly aging, for example, but the migration of large numbers of people to the cities has broken the traditional extended family structure through which the old received care.

He also addressed other issues, cautioning that environmental priorities should not push aside societal ones. He said developing nations need to show a commitment to helping their own people and not just rely on donor aid, which today provides 90 percent of AIDS treatment and which, if withdrawn, could spell disaster.

“That is unsustainable,” he said.

Osotimehin said that academics can help by providing data that defines problems and points out solutions.

“What you can do for us as a community is to provide evidence,” Osotimehin said. “Whether on youth, on aging, on reproductive health, we need evidence.”