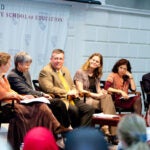 9/11 attacks prompted soul-searching, and some responses that history may question

The Sept. 11, 2001, terrorist attacks created a sense of vulnerability in the United States that still persists, that transformed the nation’s Muslim community from unseen to a suspected enemy within, and that prompted actions that one expert predicted will be viewed by history as moral failures.

That was the sense of a panel discussion on Thursday in Harvard’s Boylston Hall. Duncan Kennedy, the Carter Professor of General Jurisprudence at Harvard Law School and a member of the panel, said the attacks were not just devastating because of the horrific loss of life, but also because of the difficulty Americans had in understanding them. That was captured, he said, in the question commonly repeated after the attacks: “Why do they hate us?”

The attacks were viewed as a threat to the nation even though its existence was never truly threatened. Despite the horrific death toll, the number of those killed on 9/11 is dwarfed annually by those who die in auto accidents and murders, Kennedy noted.

But the attacks illustrated in shocking fashion that not everyone holds the overview of America commonly held at home: that of early colonies heroically throwing off European oppression. Instead, he said, the attackers saw the United States as a global power practicing its own colonialism and oppression around the world. The attacks’ impact came from both the loss of life and the targeting of symbols of American power. The World Trade Center represented economic might; the Pentagon, military strength; and the Capitol building or White House — the presumed target of the plane that crashed in Pennsylvania —global political reach.

The attacks’ impact was magnified by the fact that the two Trade Center towers were not only damaged, but collapsed, something even the terrorists couldn’t have foreseen, Kennedy said.

As the nation turns inward and remembers the victims of the attacks this week, Kennedy said, it is important that Americans do not again lose sight of their impact on the broader world and perpetuate the “naive ignorance” that once left many asking, “Why do they hate us?”

Kennedy was joined on the panel by Jocelyne Cesari, director of the Islam in the West Program and Islamopedia, and Charlie Clements, executive director of the Carr Center for Human Rights Policy at the Harvard Kennedy School. The event, sponsored by the Center for Middle Eastern Studies’ Outreach Center, the Middle East Initiative at the Harvard Kennedy School, and the Prince Alwaleed Bin Talal Islamic Studies Program, was introduced by CMES Outreach Program Director Paul Beran.

The 9/11 attacks deeply affected America’s Muslims, Cesari said. In an instant, they went from being an unseen, virtually ignored group to being under a harsh spotlight. They skipped right from unseen to “the enemy,” without ever entering the status of “the other,” Cesari said.

The new status of Muslims was crystallized by the debate over a proposed New York City mosque near the Ground Zero site of the Trade Center towers, Cesari said. Though Muslims had been victims of discrimination in Europe for decades and had encountered some resistance there to the construction of mosques in the 1980s and ’90s, there had never been that resistance in America. That’s because the United States doesn’t have a deep history of being divided by religion, she said. Now, the visible symbols of Islam have become unwelcome, and the mere presence of a mosque in a neighborhood makes some residents feel unsafe.

Race traditionally has been such a hot topic in America that critics could not openly attack Barack Obama for being black. It was all right, however, for some to attack him as being “the other” by associating him with Islam, Cesari said.

Muslims, meanwhile, are working to overcome such ill will and to “re-Americanize,” Cesari said, re-integrating into the nation’s mainstream.

That mainstream may come to view the nation’s actions since 9/11 with a more jaundiced eye as time passes, according to Clements. Clements traced how the nation’s understanding of the Cuban Missile Crisis has changed after that 10th anniversary. People now know that the world was even closer to nuclear war than was suspected then, Clements said.

Clements said the 9/11 attacks led the United States to suspend its better judgment and commit several moral lapses whose repercussions will continue to be felt.

After the attacks, there was a massive global outpouring of sympathy and good will toward the United States — including from the Muslim world — that Clements said was squandered in the subsequent military campaigns in Afghanistan and Iraq.

Congress passed the Patriot Act without lawmakers even reading what they were voting for, and other nations followed suit. Since then, Clements said, that has resulted in 120,000 people being arrested, 36,000 convicted, and an erosion of civil liberties, violations of human rights, and the legitimization of some forms of torture.

“There was a moment that the world was with us, and we squandered it,” Clements said.