What makes a thinker 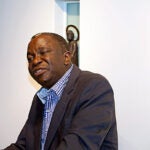 The notion of teaching people to become better thinkers is such a basic concept that most people would assume the goal has always been a vital part of educators’ tool kits.

But the concept is fairly new on the education landscape, said the man who helped to define the discipline. And it has yet to accurately address some tricky cognitive terrain.

To illustrate that point, Harvard Graduate School of Education (HGSE) Professor David Perkins asked his audience during a lecture in Longfellow Hall on Tuesday to answer what he deemed a “sensible moral question.”

“Should a man,” he wondered, “be allowed to marry his widow’s sister?”

Ethical implications aside, there was a major problem with the query, quickly picked up on by an audience member who pointed out simply: “He’s dead.”

“If he has a widow, he’s dead,” acknowledged Perkins. “Still, how liberal are we?” he added to laughs.

But his question illustrated a serious point; the intuitive mind tends to make quick judgments.

“It sounds right, so we say yes,” said Perkins. A huge amount of cognitive procession is like that, he added, noting that while such judgments usually serve us well, they also can trip us up.

The incredible resourcefulness and mischief-making of the intuitive mind deserve further study in exploring the teaching of thinking, said Perkins, Carl H. Pforzheimer Jr. Research Professor of Teaching and Learning, who is also co-founder of HGSE’s Project Zero, which probes the development of learning processes.

At Harvard, Perkins researched creativity in the arts and sciences, informal reasoning, problem solving, understanding, individual and organizational learning, and the teaching of thinking skills.

He soon will retire from the HGSE faculty, but plans to continue his affiliation with the School as a research professor.

In a talk titled “40 Years of Teaching Thinking: Revolution, Evolution, and What Next?” he discussed the development of the field, and its prospects.

The cognitive revolution exploded in the 1970s when scholars began to tackle the question: “What happens when people think?” What they found, said Perkins, was that human thought is often surprisingly simple, dominated by such traits as “the shape of the problem space, the pathways forward, and the blockades in the way.”

Researchers started to explore the “tricks of the trade,” or strategies used in problem solving. These “heuristics” included practices like starting at the end of a problem instead of the beginning and reasoning backward, or dividing a problem into parts to find a solution. Such strategies were also part of everyday thought processes like decision making and brainstorming.

The idea was to “take these general problem-solving techniques and teach people to organize their thinking,” said Perkins, who described his work with Project Intelligence at Harvard from 1978 to 1984. The study involved training a group of seventh-graders in areas such as problem solving, verbal reasoning, and inventive thinking.

While the results were helpful for Perkins and others, often treatments in the early years were too short and “didn’t grab that much of the learners’ time.” The emerging field also had to contend with a fair share of skeptics.

Those focused on the importance of a person’s IQ insisted that “thinking by and large is determined by your organic endowment.” Others complained that the teaching of thinking was too abstract and detached from “contextualized practice,” said Perkins. They argued that effective thinking and learning needed to happen in concrete physical settings with social structures. The back-to-basics skeptics “didn’t want this fancy progressive stuff” in their schools. The technique would be useless, they argued, if their children couldn’t read and write properly.

With time, study, and reflection, the movement to teach thinking has evolved and amassed knowledge.

Teachers helping students to develop better thinking strategies need “to be explicit with the thought process,” said Perkins. They need to show students how they work through a problem by dividing it into parts, or tackling a simpler problem first that will help them to solve a more difficult problem later.

We realized that “teachers needed to actively model and label what they were doing. … Tacit modeling is not enough. We know that we need to get explicit.”

In addition, the students needed to act sort of like airports, he said, calling for a type of control tower system of thinking that can clarify the bigger picture.

Students needed to “think about the overall choreography, to think about where they were in the process, and not just have a repertoire of these thinking strategies.” They had “to be thinking like a manager, a self-manager.”’

Perhaps the biggest lesson learned, said Perkins, involved a “dispositional” point of view. It’s not only considering what learners can do but “what they lean toward, what they embrace … and the power of certain emotions in our intellectual lives.”

You have to be alert and detect moments about something you can affirm or question, said Perkins. You must be engaged and care about something enough to figure it out, and you must have the ability to do the thinking in question.

To many people’s surprise, the work showed that effective thinking had less to do with a person’s IQ and “more to do with what people are alert to and care about.”

For the field to move forward, it will have to become more of a scalable model, said Perkins. In addition, he argued that the important teaching thinking techniques and strategies associated with the field will need to be taught as early as possible.

“Teach them early so that they become learning tools as learners enter more deeply into their disciplines.”

And there will need to be better management of the intuitive mind.