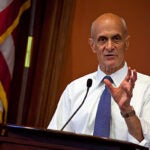 American politicians no longer politely agree to disagree. On that, participants in a panel talk Friday at the John F. Kennedy Forum all concurred.

On whether there was any chance this would change, there was dispute. Politely, if passionately, expressed.

The lack of civility in American discourse, panelists said, is part of a larger landscape of divisiveness and rancor, fueled by economic anxiety, the antics of reality TV, and the rhetoric of talk radio.

“We’ve lost respect for each other,” said Jim Leach, chairman of the National Endowment for the Humanities, during a conversation with former directors of the Institute of Politics (IOP) — “Civility in Politics: Is There Hope?”

Still, as Phil Sharp, president of Resources for the Future and IOP director from 1995 to 1997 and interim director 2004-05, put it, “civility comes and goes.” After all, Vice President Aaron Burr killed rival Alexander Hamilton, the first secretary of the treasury, in an 1804 duel, and a South Carolina congressman broke a cane over the head of Massachusetts Sen. Charles Sumner in 1856. Perhaps the U.S. president who inspired the most cohesiveness was the often-underrated Dwight Eisenhower, Leach said.

“We’re seeing the aging of the American political democracy,” said Dan Glickman, executive director of the Aspen Institute Congressional Program, a former congressman, and IOP director from 2002 to 2004. “People are looking at this country not exactly the way they looked at it after the Second World War.”

Jonathan Moore, associate of the Shorenstein Center on the Press, Politics and Public Policy and IOP director from 1974 to 1986, sketched the forces creating polarization, including the huge amounts of money now needed to run for office, insufficient empathy, a problem with truth telling, and a lack of recognizing the common good. “We’ve got to change our basic mode so that we are thinking about the interest of others in order for our own interests to be properly served,” Moore said.

Joining the panel via video link, New Hampshire Sen. Jeanne Shaheen, a Democrat and IOP director from 2005 to 2007, said politics is “meaner” than at any point during her 35 years of experience, citing the 24-hour TV news cycle and negative campaign ads as factors. She described the reaction of her 2-year-old grandson who saw an attack ad and wanted to know why his grandmother’s opponent wanted to “kill” his granny.

The political party primary process, in which a small group (often the most extreme) chooses a standard bearer, also contributes to harsh discourse as candidates appeal to the extreme wings, Leach said. He expects the country to see a third party movement, chosen by an Internet convention.

Sharp sees the American political system as self-correcting, saying the public’s negative reaction to grandstanding in the debate over raising the debt ceiling should be a wake-up call to Congress. Glickman said that a bit of self-deprecating humor in the country’s leaders would go a long way. “We need to lighten up as a society,” he said. Grayson also sees an encouraging trend in the increased number of political debates.

Zachary Rosenfeld, a first-year Harvard Kennedy School student, pressed the panel about how Congress can be effective when “reaching across the aisle” is discouraged. By focusing on results, Glickman said. The public, he said, is interested in better education and a stable economy, not ideology. Bipartisanship is a way to get things done, just as Republican Sen. Everett Dirksen and Democratic President Lyndon B. Johnson once worked together on landmark civil rights legislation, Sharp observed.

But unless there is campaign finance reform, the huge amounts of money interjected into politics by special interests — aided by the Supreme Court’s Citizens United decision — will likely continue to fuel divisiveness, the panelists said.

Corporations give money to both parties, tainting elections, and “that is more uncivil than many of the words that are being used in the political process,” Leach said.