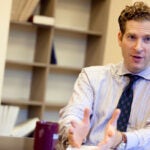 ‘The Constitution and the Question of Power’

It’s hard to envision, in the era of aggressive 24-hour political coverage, a government official telling television broadcasters what to do. But on May 9, 1961, at a meeting of the National Association of Broadcasters, new Federal Communications Commission Chairman Newton Minow did just that.

Then he delivered the line that would make front-page headlines the next morning: “I can assure you that what you will observe is a vast wasteland.”

Minow’s speech “shocked a complacent industry,” said his daughter, Martha Minow, dean of Harvard Law School (HLS). “He called for imagination, excellence, and creativity.” At Austin Hall Monday evening, both Minows hoped to stir a debate once again, while calling on contributions from the many creative minds in the room.

The Minows were joined by an all-star lineup of legal scholars, journalists, media experts, and former FCC insiders for “News and Entertainment in the Digital Age: A Vast Wasteland Revisited.” The event, co-sponsored by the HLS Dean’s Office, the Berkman Center for Internet & Society, and the Nieman Foundation for Journalism at Harvard University, produced a wide-ranging discussion on the broadened media landscape, the changing definition of the public interest, and the role that Americans play as consumers and producers in a news culture that’s more democratic than ever.

The emcee, Jonathan Zittrain, a professor of law and co-founder of the Berkman Center, noted that the rotating panel — featuring the off-the-cuff addition of Pulitzer Prize–winning historian Doris Kearns Goodwin, among others — bore more than a passing resemblance to the 1950s game show format that Minow once railed against while at the FCC.

Minow gave his famous speech in what he called “the television age,” when the government’s role, as he saw it, was to expand viewers’ choices, hoping that increased competition would lead to better programming in news, entertainment, and children’s education. “Above all, I am here to uphold and protect the public interest,” he said at the time.

The industry didn’t take kindly to the criticism: The producer of the comedy “Gilligan’s Island” named the show’s famously sunken ship the S.S. Minnow. But Minow’s speech endured, not just as an exemplar of American rhetoric, but as a thought-provoking mission statement on the role and responsibility of America’s leading communicators.

“Television had become, in 1961, the dominant form of communication,” Minow said Monday. “But there had been very little discussion or debate in the country about what that meant in terms of public responsibility [and the] public interest.”

Now, Minow acknowledged, his grandchildren don’t even own TV sets. The public has nearly limitless access to news and entertainment between cable television and the Internet. But the debate over what’s in the public’s best interest rages on, and reform is still needed, he said.

“Today’s politics are dominated by money,” Minow said. Candidates spend most of their time raising money “so they can buy radio and television ads. They’re raising money from the public to get access to something the public owns, the airwaves. That’s a crazy system.”

Compounding the problem today, said panelist Jonathan Alter, a historian and columnist for Bloomberg View, is the fact that struggling news outlets increasingly do not want to foot the costs of investigative reporting.

“Talk is cheap, and reporting is expensive,” Alter said. “The ‘vast wasteland’ now has this big ‘Tower of Babble’ on top of it.”

Other panelists were more optimistic about the new bottom-up model of news. Ethan Zuckerman, founder of the international blog network Global Voices, pointed out a recent hypothesis in the Columbia Journalism Review that says that cheaply produced, easy-to-distribute video is fast becoming “a universal human language.”

“It needs a great deal of translation [and] curation to be helpful,” but online video has “unprecedented power in bridging between different parts of the world,” Zuckerman said.

If one looks to TV for high-caliber entertainment, “you see anything but a vast wasteland now,” said New York Times culture critic Virginia Heffernan.

Rather than fearing the rise of entertainment culture, people should embrace the way news and entertainment have mingled, she said. Leaked footage of Iraqi leader Saddam Hussein’s execution may have turned up on a shock-video website, but as pure reportage it was more accurate than The New York Times coverage that appeared in the paper the next day.

“All that [New York Times] money couldn’t tell the story of what happened in that room,” Heffernan said. “Video told it loud and clear.”

While consumer choice has exploded, access to new media is controlled by even fewer players than in Minow’s time, according to Susan Crawford, a law professor who was co-leader of the Obama administration’s FCC transition team. The cable giant Comcast is now more powerful as a gatekeeper — both to television and Internet access — than the “Big Three” networks were in the 1950s and ’60s, Crawford said. If Minow were to give his speech today, the audience would be even smaller.

“The political bravery of this speech is unthinkable now,” Crawford said. “More than ever, we’ve got a vertically integrated business … where the advertisers are the clients, and we are all the product.”

Regulation of new forms of communication, whether television in the early 1960s or the Internet today, has always lagged behind the pace of technological development, Minow said. Thoughtful debate about those technologies has fallen even farther behind.

“Discussion of the public responsibility” of media gatekeepers has long been neglected, he said. “And I hate to say it, but it’s neglected today.”