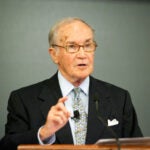 Michael Chertoff had a common reaction to the news of a plane hitting one of the World Trade Center towers in New York City on Sept. 11, 2001.

“Like many people at the time, I thought it was a pilot error,” the former U.S. secretary of Homeland Security told a lunchtime crowd at Harvard Law School on Tuesday.

But when he learned of a second plane doing likewise, Chertoff, who was then the assistant attorney general in charge of the criminal division at the Justice Department, knew the country was under attack. He spent the next agonizing hours at the Federal Bureau of Investigation’s operations center trying to help predict when or where another plane might hit and how to bring it down.

“The thoughts that go through your mind are, ‘there could be far worse,’” like biological or nuclear attacks, he recalled.

During a discussion at Austin Hall, Chertoff outlined a paradigm shift in the nation’s approach to security, one he argued happened before the attacks of 9/11. The actions that tragic day, he said, only served to highlight “something we hadn’t recognized and which the law had not adequately accounted for,” and underscored the need for a new legal framework aimed at combating terrorism.

According to Chertoff, who ran Homeland Security from 2005 to 2009, throughout much of the 20th century, attacks or threats against the United States either fell under the war heading, and were typically encountered overseas, or they landed in the law enforcement rubric involving groups or individuals at home.

But since the end of the Cold War, three developments have “profoundly changed the world and therefore the world of security threats,” and fractured those two established paradigms, he said.

Globalization has radically altered the potential impact of a network or even an individual, offering the ability to travel, communicate, and exchange money on a scale that was impossible only 30 years ago. The technology revolution has allowed ever-fewer people to cause massive damage with the touch of a button. The increase in “ungoverned space,” where there is no true rule of law, has enabled terrorists to recruit, plan, and train unhindered, said Chertoff.

That reality requires a policy-driven security solution, one that addresses concerns about the consequences, the constraints, and the “art of the possible” in combating terrorism, he said. Analyzing factors such as the international nature and scale of the threat, the safeguarding of civil liberties, and the types of actions that are permitted in areas where no sovereign government enforces the rule of law will be necessary when developing such a security system, he said.

Often, in places like Somalia or parts of Afghanistan, where there is no hope of serving a subpoena, you are pushed into using the “pointy end of the spear,” instead of traditional law enforcement measures, said Chertoff.

Hard-core terrorists aren’t looking for plea bargains, said Chertoff, who oversaw the prosecution of the “20th hijacker” Zacarias Moussaoui after 9/11. “If they are [read their rights], then they are going to shut down any conversation very quickly, and you are not going to get much intelligence from them,” he said, suggesting instead the possibility of using a military-type tribunal system where detainees don’t necessarily receive notice of their rights or immediate access to a lawyer.

“That is a factor to be considered when deciding which of the tools in the toolbox you use against terrorists when you capture them. … The focus here is practical.”

Much of the internal fighting about how to approach the war on terror is about whether aspects fall into “the traditional bucket of law enforcement versus the bucket of war,” said Chertoff.

Instead, he said, we “need a legal flexibility that actually fits the facts,” one that is created after a careful consideration of factors rather than one in which you try to “force a novel set of affairs into preexisting categories.”

“That is going to be your challenge in years to come,” he told the crowd of lawyers in training.

Responding to a question about those people who complain the government overreacted with its security measures in the wake of 9/11, Chertoff said the government’s actions are what have prevented further terrorist attacks. But he warned the crowd to remain vigilant.

“We can’t afford to rest on our laurels, because the enemy continues to reinvent itself.”