‘The Constitution and the Question of Power’ 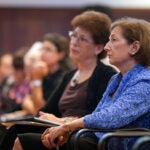 Noah Feldman, Bemis Professor of International Law at Harvard Law School, will deliver a lecture titled “The Constitution and the Question of Power” at 1 p.m. Sept. 19 in Emerson Hall, Room 101. The event is free and open to the public.

The lecture commemorates Constitution Day, the annual celebration of the signing of the U.S. Constitution on Sept. 17, 1787. In accordance with a bill signed into law by President George W. Bush in 2004, all educational institutions receiving federal funding are required to hold an educational program pertaining to the Constitution.

The Constitution is the central instrument of American government and the “supreme law of the land.” It is the oldest written constitution in the world still in force. It outlines the structure and powers of the three branches of the federal government, and the division of power between the federal and state governments. The Constitution, which took effect in 1789, has served as a model for similar documents in many other nations. The original document, covering four pages, is housed in the National Archives Building in Washington, D.C.

Feldman specializes in constitutional studies, with particular emphasis on the relationship between law and religion, constitutional design, and the history of legal theory. He is a contributing writer for The New York Times Magazine and an adjunct senior fellow at the Council on Foreign Relations. In 2003 he was senior constitutional adviser to the Coalition Provisional Authority in Iraq, and subsequently advised members of the Iraqi Governing Council on drafting the Transitional Administrative Law, or interim constitution.