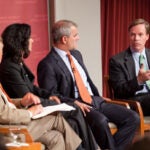 Panel ponders how to discuss 9/11 in the classroom effectively

As the nation began to commemorate the 10th anniversary of the Sept. 11 terror attacks, a group of scholars and educators gathered at Harvard to explore how to teach the legacy and the history of the tragedy to students who have come of age in its wake.

During a discussion held at the Harvard Graduate School of Education (HGSE) on Wednesday, the panelists said that a broad cultural and religious literacy, a historical context, and a focus on empathy are all important elements when bringing the sensitive topic to the classroom.

Harvard’s Ali Asani warned that in the years following 9/11, a small but dangerous array of anti-Muslim activists, right-wing scholars, and politicians have painted Islam and Muslims as anti-American and a “threat to American democracy and national security.”

“Illiteracy about religion promotes this fear,” said Asani, professor of Indo-Muslim and Islamic religion and cultures and chair of Harvard’s Department of Near Eastern Languages and Civilizations. He called for a greater study and understanding of religious subtext and meaning, saying, “We as a society need to be more literate.”

Many panelists agreed that an important aspect of such discussion involves the notion of empathy.

Trying to teach 9/11 is difficult in part because it can lead to the reinforcement of certain narratives, said panelist Thea Abu El-Haj, an associate professor at the Rutgers Graduate School of Education. She recalled President George W. Bush’s line, “You are with us, or you are with the terrorists,” saying that such rhetoric scared away many teachers from broaching the subject in class. Discussing 9/11, said Abu El-Haj, can help students to develop empathy for different cultures and perspectives, and broaden their understanding of the world.

“One of the struggles is thinking about how to teach about not just 9/11, but the context before, and what has followed in ways that aren’t simply nationalist or patriotic … [while] creating context for empathy.”

Diane L. Moore, a senior lecturer on religious studies and education at Harvard Divinity School, said it is important to remember that students may bring their own ideas about the tragedy to the classroom.

“First, make sure that you give students a chance to begin to articulate their own assumptions about what 9/11 means,” said Moore, “because they are going to come with those assumptions … and they will cloud [their] vision, in terms of understanding multiple perspectives.”

Helping students to understand that terrorism doesn’t just “originate from people beyond our borders but was in fact part of American history” is important, said Beverly Gage, an associate professor at Yale University who teaches a course on terrorism in the United States.

The nation’s experience with anarchist and labor-related violence, or the domestic history of the radical right and the left, said Gage, can provide effective teaching moments that allow students to study the kinds of questions raised by 9/11 in “a different historical context.”

Panelist Christopher Ougheltree, a social studies teacher at Cranston High School East in Rhode Island, won a teaching award last year from the Tribute World Trade Center Visitor Center for his 9/11 curriculum. Accompanied by six of his former high school students, Ougheltree said he uses videos that capture vivid images of the attacks to help put “a face to the tragedy,” and to remind his students “the heroes that day were common folk like us.”

Meira Levinson, associate professor of education at HGSE, moderated the event. Earlier in the week, Levinson offered her reflections on teaching 9/11 in the classroom for a Harvard EdCast.