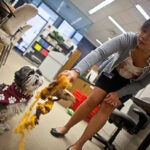 Dr. Kenneth L. Baughman died on November 16, 2009, after being struck by an automobile while running during the American Heart Association Annual Scientific Sessions in Orlando, Florida. His tragic death at age 63 threw into relief the enormous impact he had on the Harvard community in his seven years on our faculty, as the director of the Advanced Heart Disease and Cardiac Transplantation Program at Brigham and Women’s Hospital.

Dr. Baughman trained in internal medicine at the Johns Hopkins University School of Medicine, and served as a fellow in the Cardiac Unit of Massachusetts General Hospital before joining the faculty at Johns Hopkins. He rose through the ranks and became chief of the Cardiology Division, a position in which he served for 10 years before being recruited to Harvard Medical School. Dr. Baughman’s impact was immense. He was a consummate clinician, adored by his patients and respected by his colleagues for his insight, judgment, and commanding clinical presence. He was tirelessly devoted to patient care, providing an exceptional role model for younger physicians and colleagues alike as a dedicated, devoted, skilled, and compassionate clinician. Always giving more of himself than he asked of others, he worked skillfully wherever there was work to be done. He preferred his quiet efforts to be unheralded, in keeping with his modest nature. He was the doctor’s doctor, the teacher’s teacher, and the friend upon whose kind word you could always rely at the end of the day. His presence reflected not only his enormous qualities as a leader, but also his absolute integrity. He was always direct and open in his relationships, and his word was as good as gold. Dr. Baughman touched the lives of his patients in ways seen and unseen. Many patients who share his passion for exercise have continued to abide enthusiastically by the principles and examples he set for them. We hear weekly of their athletic exploits despite their chronic cardiac conditions.

Dr. Baughman also made major contributions to clinical science as a scholar of myocarditis and heart failure. These ranged from the detailed microscopic studies of myocardial inflammation from biopsies he obtained by his own deft hand, to important outcome studies in underserved community populations. His work elucidated the varied categories of myocarditis in ways that now allow clinicians to more effectively predict and improve the outlook for all patients with this affliction. His work evolved to embrace the era of molecular biology through the national collaborative research program he founded at Brigham and Women’s, which aims to provide the definitive elucidation of the role of viral infection in new-onset and chronic cardiomyopathy using molecular diagnostic modalities.

Dr. Baughman cherished a grand vision of a cardiovascular institute that would embrace the wide spectrum of related specialties in one center where patients would thrive through truly integrated care. This center also would be designed for sharing the care and education of patients with their families, in an atmosphere of natural light, serenity, and unsurpassed quality. This vision was shared by the Shapiro family, and realized in the Carl J. and Ruth Shapiro Cardiovascular Center. This landmark of the Longwood area, which opened in 2008, serves as a physical memorial to Dr. Baughman’s ideals.

Perhaps even more enduring, however, will be Dr. Baughman’s legacy, which derives from his generous mentorship. He unstintingly and selflessly guided younger colleagues along their career paths, always placing their learning and prominence ahead of his own. He had a very special brand of mentorship for established colleagues: he did not advise them regarding what he thought they were capable of achieving, nor of what they had achieved. Instead, he taught them to look inside and ask it of themselves. His loss has produced waves of dismay and loss, from residents and nursing staff to fellows, junior faculty, and senior colleagues locally, nationally, and around the world. During his decades of service at Johns Hopkins and his all too short tenure on the Harvard Medical School faculty, he impacted hundreds of careers in ways that immeasurably influenced our field, and will continue to do so as generations of physicians propagate his ideals by both precept and example. Virtually everyone he touched has a “Baughman” example to share, as testimony to his skill at helping them to understand complex problems in a more intuitive way.

Dr. Baughman was an avid athlete, regularly competing in triathlons and rarely missing a day of training. He was a particularly devoted family man, taking great joy and pride in his grandchildren, his two sons, and his home life with his wife, Cheryl. Dr. Baughman passed from our community tragically and all too soon, but his legacy lives on and will continue to inspire and guide all who were touched by this extraordinary physician and human being.