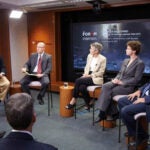 A decade after 9/11, analysts say U.S. should shift military focus

U.S. policymakers should use the 10th anniversary of the 9/11 terror attacks as an opportunity to shift from a military-driven “global war on terror” to a policy built more on diplomacy, outreach, and persuasion, panelists told a Harvard Kennedy School (HKS) audience Tuesday evening.

R. Nicholas Burns, who served as undersecretary of state for political affairs from 2005 to 2008, said the United States spent the last decade fighting two land wars, at a cost of $4 trillion, with more than 130,000 dead in Iraq and Afghanistan, and nearly 8 million refugees, according to a recent study.

“We’ve got to end both wars,” said Burns, professor of the practice of diplomacy and international politics. “There is no conventional victory available to us in Afghanistan, and there certainly isn’t in Iraq.”

“What we need is to see the return of diplomacy as the major way that we interact with the rest of the world. The military was asked to do too much,” Burns said. “We can’t fight everybody. After 9/11, we got into a defensive crouch. We said it’s our way or the highway; it’s us against them; it’s black and white. And you can’t do that indefinitely.”

Juliette Kayyem, an HKS lecturer in public policy and a former assistant secretary in the Department of Homeland Security, said the United States was far safer thanks to vastly improved security and the campaign against al-Qaida, culminating in the killing of leader Osama bin Laden.

“I think if we don’t pivot away from this notion of the war on terror now, there aren’t going to be many better opportunities,” she said.  “If we don’t recognize that we have limited the threat, and begin to look at this as not a war, then we are in this indefinitely. If the anniversary provides anything, it may be that.”

Kayyem and Burns joined a John F. Kennedy Jr. Forum at the Kennedy School titled “9/11: Ten Years On,” co-hosted by the Institute of Politics and the Belfer Center for Science and International Affairs.

Belfer Center Director Graham Allison, who moderated the forum, noted the many ways in which the 9/11 attacks left vivid memories. Two of the hijackers of United Airlines Flight 175, for example, had stayed in the Charles Hotel next door to the Kennedy School. Allison said his wife had been booked on Flight 11 from Logan International Airport that day but changed the booking at the last minute to the following day. They still have her boarding pass.

Allison said one consequence of the 9/11 attacks is that “certainly we are now aware, in a way that pre-9/11 we weren’t, that we are vulnerable.  The security bubble in which many Americans imagined we lived, somehow apart from the rest of the world, wasn’t real. So the consciousness of it makes us all more alert, aware.”

Allison, an authority on the threat of nuclear terrorism, weighed the advances in security during the decade against the continuing risks: “Is Al Qaeda only a pale shadow of the organization that attacked us on 9/11? Yes. Is that a great success? Absolutely. But does that lead me to think that somebody couldn’t kill thousands in the United States tomorrow?”

Michael Leiter, a Harvard Law School graduate who served in both the Bush and Obama administrations as director of the National Counterterrorism Center, said, “Technology makes it easier and easier to kill people. … So dumber and dumber people are going to be able to make weapons with technology.”

But Leiter said he had “zero doubt that we are safer today.” He said that while another attack that could kill 3,000 people is still possible, “it is vastly less likely to occur today than it was on Sept. 11, either domestically or overseas.”

Leiter agreed with Burns that the security and counterterrorism efforts of the last decade have not been matched in what Burns called the vital fourth pillar of national security: a strong State Department and Agency for International Development.

“I can’t agree more how weak the fourth pillar is in funding,” said Leiter. “And it could get worse. That is the area where we’ve done worst in counterterrorism in the last 10 years. That is in combating the ideology, and convincing people that the United States is a force for good.”

Burns argued that instead of fighting land wars in the Mideast and South Asia, the United States should shift its diplomatic focus to East Asia, and concentrate on managing China’s rise and the resulting security tensions in the Pacific. And that initiative will need a new strategic approach.

“We need a strong military to defend ourselves. But I’m suggesting that the diplomats, the economists, the aid workers, and the journalists should be on the front line of American foreign policy, with the military in reserve. We’ve got it the other way around at the moment.”