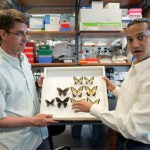 Scientists at Harvard-affiliated Dana-Farber Cancer Institute have successfully disrupted the function of a cancer gene involved in the formation of most human tumors by tampering with the gene’s “on” switch and growth signals, rather than targeting the gene itself.

The results, achieved in multiple myeloma cells, offer a promising strategy for treating not only myeloma but also many other cancer types driven by the gene MYC, the study authors say. Their findings will appear in the print issue of the journal Cell on Sept. 16. Details of the study are currently available on the journal’s website.

“Cancer is a disease of disregulation of growth genes in a cell, and MYC is a master regulator of these genes,” says James E. Bradner of Dana-Farber and  Harvard Medical School (HMS). Bradner is one of the study’s senior authors. Previous attempts to shut down MYC by inhibiting it directly with drug molecules have been notably unsuccessful. “In this study, our idea was to switch MYC off, interfering with its ability to activate the cell-growth program.”

The researchers did so with a small molecule called JQ1, developed by Dana-Farber’s Jun Qi, a co-author of the new study and namesake of JQ1. Qi is a research fellow in medicine at HMS.

In multiple myeloma, MYC is hyperactive — constantly ordering cells to grow and divide — because it is in the wrong position in the cells’ chromosomes. Instead of its normal, quiet neighborhood, MYC finds itself adjacent to a gene known as the immunoglobulin gene. This busy gene is switched on by bits of DNA known as immunoglobulin enhancers, which normally prompt the cell to begin producing disease-fighting antibodies. In myeloma, the immunoglobulin enhancers act on the out-of-place MYC gene like an impatient finger at a doorbell, repeatedly activating it.

Researchers found that the enhancers are loaded with a “bromodomain” protein called BRD4, which, they demonstrate, is used to switch on MYC. Conveniently, it is targeted by JQ1. When investigators added JQ1 to laboratory samples of myeloma cells, the bromodomain proteins fell off the enhancers and the enhancers abruptly stopped working. The result: a shutdown of MYC and a slowdown of cancer cell division.

“In a sense, the JQ1 molecule cuts the cable that activates MYC and also connects MYC to the cell-growth genes,” Bradner says. “The signal is interrupted and growth abruptly stops.”

When investigators administered JQ1 to laboratory mice harboring myeloma cells, the disease receded and the animals lived longer than those that had not been treated. The study authors emphasize that JQ1 is a protytpe drug and cannot be used immediately to treat myeloma or other cancers. Its success in the current study illuminates the promise of JQ1-based therapies that target bromodomain proteins in cancers dependent on MYC for their growth.

“Together, our findings show that BRD4 has an important role in maintaining MYC activity in myeloma and other blood-related malignancies,” says the study’s senior author, Constantine Mitsiades of Dana-Farber. “[These findings] also point to the potential usefulness of druglike bromodomain inhibitors as novel therapies against these diseases.” Mitsiades is an instructor in medicine at HMS.

The study’s lead authors are Jake Delmore and Ghayas Issa of Dana-Farber.

Financial support for the study was provided by the National Institutes of Health, the Chambers Medical Foundation, the Stepanian Fund for Myeloma Research, the Richard J. Corman Foundation, the Burroughs-Wellcome Fund, the Smith Family Award, the American Cancer Society, and the Damon Runyon Cancer Research Foundation.