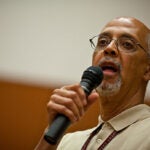 Chilean President Sebastián Piñera said Friday that he hopes to lead fast-growing Chile past the middle-income rut that has trapped many of the world’s developing nations, and instead bring it into the ranks of developed nations by the end of the decade.

Piñera, who spoke to a packed John F. Kennedy Jr. Forum at the Harvard Kennedy School (HKS), said that an overhaul of the nation’s education system will be a key factor in sustaining the growth needed to achieve that goal, as will continued investment in infrastructure, and maintenance of the South American nation’s many free-trade ties.

Piñera, who was elected in early 2010, said that the rapid growth experienced by Chile from the late 1980s to the late ’90s has resumed in the past year or so. Piñera said the nation’s stable democracy, economic growth, and free trade with many nations have made conditions ripe for continued expansion. He was concerned, however, that the prosperity being experienced by the Chilean people not lessen their desire to continue the hard work needed to achieve that goal.

Piñera, a businessman who received a doctorate in economics from Harvard in the 1970s, was introduced by HKS Dean David T. Ellwood and by Merilee Grindle, Edward S. Mason Professor of International Development at the Kennedy School and director of the David Rockefeller Center for Latin American Studies (DRCLAS). The event was co-sponsored by DRCLAS and by the Harvard Organization for Latin America.

In her introduction, Grindle highlighted Harvard’s many connections to Chile. In addition to students from Chile studying here, Harvard faculty members and students travel to Chile to study and conduct research, some of it through the regional office that the Rockefeller Center maintains in Santiago.

Last spring, Piñera met with Ellwood and Harvard President Drew Faust when a delegation from Harvard visited Chile. Faust returned the favor on Friday, greeting Piñera during a visit to Massachusetts Hall.

Piñera’s tenure got off to a rocky start. Ten days before he took office, a major earthquake struck the nation, taking hundreds of lives, destroying roads, bridges, schools, and hospitals. The ruined infrastructure and buildings and the disruption to the economy amounted to 20 percent of the nation’s gross national product, Piñera said. (By comparison, the disruption from Hurricane Katrina striking New Orleans was just a tenth of a percent of the U.S. gross national product.)

In recent decades, Piñera said, two important impediments that divided the globe have fallen. The first was the Berlin Wall, which divided east and west. The second was a metaphorical wall, which separated rich northern nations from the poor southern ones. Rapid development of southern economies has rendered that divide obsolete, he said, though work remains to be done.

Latin American nations, Piñera said, have missed major opportunities to make their mark on the world stage. Blessed with large amounts of land and ample natural resources — while being spared the disruption of World War II, the religious strife like that in Ireland and the Middle East, and the regional conflicts like those in Africa — Latin America has nonetheless failed to produce the economic growth and resulting prosperity of industrialized nations.

“We need to recover the time we lost,” Piñera said.

Chile has already made significant progress, Piñera said. Chile was once the poorest Spanish colony, but after the “Chilean miracle” of the late 1980s and ’90s it has the highest per capita income, at $15,000, in Latin America. Key to this transformation, Piñera said, is the nation’s free-trade policies. About 70 percent of Chile’s gross national product comes from international trade.

The nation went through a period of stagnation during the past decade, but growth has picked up again, rising 8.4 percent during the first part of this year, lifting wages and exports, he said.

Piñera is aware how difficult it will be to avoid the trap that often causes developing nations to plateau once they rise to middle-income status. Only five economies, those of Japan, Korea, Hong Kong, Taiwan, and Singapore, have successfully gone from undeveloped to developed in recent decades. Piñera said he wants Chile to be the sixth.

“We are fully aware that despite this [recent growth], we are halfway toward transforming Chile into a developed country,” Piñera said.

Driving the change, Piñera said, will be a major, $4 billion reform of the nation’s educational system, from the earliest grades to the university level, to keep abreast of rapidly evolving technology.

“We arrived late to the Industrial Revolution. We will not arrive late to this new revolution, which is much, much more important than the old one,” Piñera said.

Piñera’s optimism about Chile was not reflected in his opinion of the international community. International institutions are badly in need of reform, he said, as evidenced by the many challenges facing them involving climate change, terrorism, the drug trade, and the economic crisis.

Piñera mentioned two agreements in the offing that he said will help Chile toward its goal. One is a trade pact with the United States and nations around the Pacific, and the second is an agreement being negotiated with Massachusetts around energy, education, and technology.

“We are still working,” Piñera said. “We have difficult times ahead. This is a time for great people, and not people who give up at the first obstacle.”