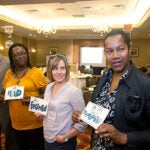 The work of a Harvard history professor has bolstered the case of a group of elderly Kenyans who are seeking reparations from the British government for rape, castration, beatings, and other abuses that they say were part of systematic colonial-era efforts to suppress Kenya’s Mau Mau uprising.

The case passed a critical milestone in July when a British judge allowed it to move forward despite government arguments that, if the abuses happened, the current government isn’t liable for colonial transgressions.

The Kenyans are former detainees in British prison camps set up during the 1950s Mau Mau rebellion, which set the stage for Kenyan independence in 1963. The plaintiffs allege that their abuse came at the hands of British jailers in what was a systematic and government-sanctioned campaign to break the rebellion.

Though there had been talk of reparations for colonial atrocities for years, the case was given new life by Professor Caroline Elkins’ Pulitzer Prize-winning book, “Imperial Reckoning: The Untold Story of Britain’s Gulag in Kenya.” The book, published in 2005, blended government documents and eyewitness accounts to tell a compelling story of a horrific, systematic campaign by the British colonial government to crush the rebellion not only in the field, but through abuse of those held in camps around the country.

“Caroline’s work has been absolutely fundamental to the case,” said Daniel Leader, a barrister for the London law firm Leigh Day & Co., which is representing the former Kenyan detainees. “She was uniquely responsible for beginning to change the public’s understanding of that period in history…. The victims are forever in her debt. She put their stories on the map.”

It was Elkins’ work, Leader said, that indicated that the abuse was not only systematic, but known by the British government in London.

George Morara, program officer for the Kenya Human Rights Commission, which has worked to identify plaintiffs who could bring the case before the courts, said that Elkins’ research built an important foundation that allowed the case to move forward.

“Without her seminal work,” Morara said, “this story wouldn’t have come to the fore.”

Elkins’ critics, however, have charged that, though there may have been abuses in the system, there was no systematic effort by the government to abuse detainees.

The July 21 ruling denied a motion to dismiss the case on the grounds that the current British government has no responsibility for actions by the colonial government in Kenya. While the judge didn’t rule on the merits of the case itself, the decision represents a key victory for the former detainees.

The decision sets up a hearing on a second government motion to dismiss the case, Elkins said, this one based on a statute of limitations for such cases. The court can make exceptions to the statute of limitations, however, and Leader said the plaintiffs will use examples of other atrocities cases that have been prosecuted long after the acts were committed to illustrate that a fair trial is possible. Should the case clear that hurdle, expected in early 2012, Elkins expects the trial itself to begin next spring or summer.

In addition to revelations contained in “Imperial Reckoning,” Elkins and two other historians acting as expert witnesses have submitted lengthy reports to the court; they’re also reviewing thousands of pages of previously undisclosed, colonial-era documents the government has brought forward because of the case. Elkins said the experts’ review of these documents has already yielded numerous memoranda that further substantiate both her thesis of systematized violence and the witness testimony she collected recounting abuse and torture in the camps.

For Elkins, the court decision and the new documents substantiating her work provide a bit of vindication. Though her book garnered a great deal of praise in the U.S., winning the 2006 Pulitzer Prize for general nonfiction, it was also attacked in both Britain and Kenya as inaccurate and based on unreliable witness testimony.

Elkins said she’s grateful for those at Harvard who stood by her while, as a graduate student, she worked on her dissertation, which was the basis for “Imperial Reckoning,” and when, as a junior faculty member, she endured the attacks on her work.

In 2006, Morara and the Kenya Human Rights Commission began interviewing veterans in hopes of bringing a case to British courts. Three men and two women were chosen, one of whom, Susan Ciong’ombe Ngondi, has since died.  The four remaining plaintiffs, Ndiku Mutua, Paulo Nzili, Wambugu Wa Nyingi, and Jane Muthoni Mara, are all elderly, in their 70s and 80s. The case was filed in 2009.

The case itself seeks an apology from the British government for abuse in the camps and establishment of a welfare system for former detainees, some of whom, Leader said, were unable to have children due to their treatment. In Kenya’s traditional culture, where children provide for their elderly parents, detainees’ inability to have a family leaves them with little means of support, he said.

From a historian’s viewpoint, the case is one of what actually happened versus what people say happened, Elkins said. The government and its supporters have dismissed the firsthand testimony and eyewitness accounts of those who suffered, compounding what occurred in the detention camps decades ago.

“It’s now a duel between colonial-inspired history and revisionist history,” Elkins said. “On top of it all, some have called the people who survived these horrific tortures liars. The British government behaved badly in Kenya, and many have continued to do so in an effort to conceal or minimize colonial abuses.”