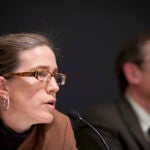 Behavioral economist Iris Bohnet studies gender gaps in economic opportunity, trust and betrayal aversion, and how these and related issues affect the workings of governments, economies, organizations, and individual interactions. Bohnet is a professor of public policy, the director of the Women and Public Policy Program, and the new academic dean of Harvard Kennedy School. Read the full interview here.

HKS: Some of your most recent research has looked at gender imbalance in the workplace using the concept of the “nudge” to help correct that imbalance. Please explain the impetus for this work.

BOHNET: The work builds on the idea that it’s not always easy to do the right thing. And when I say the “right thing” I mean choosing an apple over a chocolate bar, or putting your money into a savings account rather than buying new shoes. I’m thinking of gender equality very much like I think about apples or putting your money into a savings account: Namely, many organizations now want to change, want to close gender gaps, partly because it is the right thing to do … but also because it increasingly is the smart thing to do.

We now know that the talent pool is increasingly female, and therefore many companies look harder at their hiring and promotion practices, asking the question of where all these women graduates — who, in many countries, are more than their male counterparts — where do they go? And how do they climb up the ladder in our company, in our organization? And so that’s where gender equality “nudges” come into play. We would argue that many of the decisions that are made are not made by people who want to actively discriminate. Rather, they’re made because of how our minds work. There are implicit biases, which guide our judgments, not just related to gender but related to all kinds of decisions that we make every day. It’s these implicit biases that we want to overcome with gender equality nudges.

Nudges change the environment ever so slightly — they change organizational practices, they change how we hire, how we promote people, creating a more equal playing field for men and women.

HKS: Why do you believe the “nudge” approach is more effective in the workplace than trying to change beliefs that lead to stereotypes, or diversity training?

BOHNET: Nudges change environments and organizational practices. Here’s an example: We’ve looked at how companies typically hire and in particular how they promote. Promotion decisions are often made one at a time — a certain person does a great job and we try to decide whether he or she should be promoted.

In contrast, many hiring decisions are made comparatively, so we look at various candidates at the same time and compare their qualifications for a certain job.

We would argue, based on a lot of research in social and cognitive psychology as well as behavioral economics, that how we evaluate affects how we decide.

It turns out that comparative evaluation leads to very different outcomes than separate evaluation. In fact, in our study, they completely erased stereotypes. When people examined one candidate at a time, they did tend to focus on stereotypes, but when they had comparison information available, performance information tended to prevail. That’s a very easy way for companies to think about hiring and promotion decisions. I’m well aware that promotion decisions often can’t wait until there is a slate of candidates available for comparisons, but there are other comparisons available. For example, the pool of people promoted in the prior year or over the last five years. So we’re encouraging companies to think creatively about the decisions they make and to build on insights from behavioral decision research to restructure their environments.

HKS: You have been very involved with the Harvard Kennedy School’s Decision Science Laboratory and some of the research being conducted there. How does the lab and the work being done there help contribute to our understanding of gender imbalance issues?

BOHNET: Much of my research starts in the Decision Science Laboratory. What the laboratory allows us to do is to test institutional interventions. So think of the example of changing hiring and promotion practices. We can go to the lab and test in a sterile environment whether the sheer basics of the ideas work. So when you give people comparison information, do they judge others in a less stereotypical way? Another question we are studying in terms of gender equality is whether when you hire in bundles — rather than one person at a time — does diversity emerge? Do people look at different criteria when they make five offers rather than one offer at five sequential times? The lab helps me test the interventions that I think we would like to bring to organizations broadly, and gives us a first insight into what mechanisms are likely to work; it tells us how the psychology of our minds responds to different interventions.