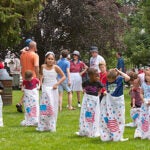 Fireworks in the voting booth

In some instances the details are so graphic, her editor chooses not to publish them.

For years, investigative journalist Fatima Tlisova has documented the torture of prisoners and the corruption of government officials in Russia’s Northern Caucuses. And for years, Russian officials, and the mainstream media, have largely ignored her stories.

But the work is vital and needs to reach a wider audience, said Tlisova during a discussion at Harvard’s Berkman Center for Internet & Society. The July 11 talk explored the challenges of reporting international stories to U.S. and global audiences.

Because many members of the Russian media are also corrupt or controlled by the government, the real stories are never told, Tlisova said. “That is why attention from the Western audience is needed,” she said, so that the world knows what is happening.

She recalled reporting on a corrupt Chechnyan official who, though he earned a mere $5,000 salary, had a fleet of exotic sports cars and lived in a mansion. She showed the audience a Web video shot by citizens who snapped pictures of the home and the vehicles using their mobile phones.

“The media doesn’t give you the real picture,” she said. “You have to listen to the local people.”

But a commitment to reporting the truth can come with a high price, as is the case with Nigerian Dele Olojede.

A joint winner of a Pulitzer Prize in 2005 for his work reporting on the aftermath of the Rwandan Genocide, Olojede began his career in Lagos, Nigeria. He later worked for Newsday in the United States, eventually becoming the paper’s foreign editor.

One day Olojede said he “looked up on the wall and saw that the clock was winding down.” So he returned to Nigeria, where he created NEXT, NextOnSunday, and 234NEXT.com, news outlets that he calls “an honest space” for credible news.

But today his business is on the brink of collapse after advertisers and shareholders balked at his practices of exposing widespread government corruption. Despite his efforts, the public continues to elect the same corrupt officials, said Olojede, and the mainstream media ignores the story. His options, he said, are to find another type of business model, or “just say the hell with it, we have already made our statement.”

He challenged the audience with “a very important question.”

The event was a tribute to Persephone Miel, a onetime Berkman Fellow who died last year. Miel was a longtime employee of Internews Network, a media development organization that supports independent media around the world.

She devoted much of her life to figuring out how to help make international stories more accessible to American and global audiences.

One of the best ways to honor Miel’s memory is to seek out and engage with stories that are largely ignored by the mainstream media, said Ivan Sigal, executive director of Global Voices, a nonprofit media initiative.

In places like Afghanistan and Pakistan, “tremendously dangerous places to work,” where U.S. reporters focus on drone strikes and terrorism, local journalists are also risking their lives to report on those and other important stories with a different point of view, he said.

“The potential for us to listen to and read and hear stories that are coming from Pakistanis that are not about primarily the framework that the American media places on those stories or those kinds of narrow channels … is a tremendous one, and I urge you all to take the time to engage those different stories.”

Jon Sawyer, founding director of the Pulitzer Center on Crisis Reporting, briefly discussed the Persephone Miel Fellowship. Before she died, Miel expressed her wish to be remembered by a fellowship that would help journalists outside the United States report on their home countries and bring their stories to a wide international audience. The fellowship, overseen by the Pulitzer Center in partnership with Internews, recently announced its first fellows.

“Persephone was so involved in so many things,” said her husband, Tony Rudie, who spoke briefly at the event. “We miss her in so many different ways.”