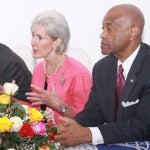 Educator Karen Daniels was “Lost,” but she was not alone. “Scared” soon found her, as did “Helpless.” And “Alone” was nearby.

Actually, Daniels, the executive director of StepUP, an initiative between the Boston Public Schools and five university partners including Harvard, knew exactly where she was on Wednesday (July 27) — at the DoubleTree Suites Hotel in Boston, participating in a hands-on exercise designed to provide educators with new tools and perspectives on how children think, perceive, and learn.

It was part of a weeklong seminar called “Mind in the Making,” developed by the Harvard Achievement Support Initiative (HASI) as part of the University’s commitment to public service. The seminar exposed Daniels and about 25 fellow teachers, principals, and instructors from the Boston area to cutting-edge work in child development and brain research.

“Teaching practice improves when educators have a working knowledge of the significant research in child development, and are able to translate this knowledge into their teaching practice,” explained Joan M. Matsalia, program instructor and assistant director of HASI, the University’s development and grant-making effort to increase learning opportunities for Boston’s young people.

Putting a hands-on philosophy into action, the seminar de-emphasized the traditional lecture-and-note-taking format to engage participants through lively discussions, exercises, and activities. For example, participants were given signs, such as “Angry,” “Disappointed,” and “Frustrated,” and told to find others with a sign similar to theirs; it was a physical manifestation of emotions that can mask a child’s true feelings. An angry child may, in fact, be a frustrated child, who can only express his or her anger by acting out.

Or as program instructor Rita Spinola asked the group: “How does ‘mad’ show itself? Does it always show as ‘mad’?”

“No,” came the rousing chorus. In fact, “People who could feel the same way can look very different,” Spinola said.

In another exercise, participants wore headbands labeled with a trait they couldn’t see, such as shy, exuberant, thoughtful, critical, or uninhibited. Participants were instructed to treat each person according to their headband, forcing all to consider the force of preconceived notions.

Additionally, the course used short videos featuring about 70 researchers explaining their work, including Catherine Snow, Harvard’s Henry Lee Shattuck Professor of Education, speaking about language and literacy, and Jerome Kagan, the Daniel and Amy Starch Professor of Psychology Emeritus, on temperament. Participants watched behavioral experiments that, for example, revealed that a child’s ability to consider the perspective of others may begin in infancy, not, as often assumed, years later as concrete reasoning develops.

“We can teach better when we understand how we learn ourselves,” Matsalia noted.

Participants also hashed out classroom strategies with each other, such as how to handle a girl who cannot let go of her anger (perhaps offer some self-soothing exercises), or how to encourage parents of troubled kids to show up for conferences with teachers (perhaps offer babysitting or a meal).

Certainly, schools must focus on subject areas or prepare students for the state MCAS tests, but an overriding issue for many educators today is the social and emotional development of young children that puts them in a mindset to learn. This is particularly crucial with the exposure of youngsters to violence, which can manifest itself years later.

“We’re seeing kindergarteners and pre-schoolers with serious post-traumatic stress issues, all kinds of things,” Daniels said. The challenge for educators then becomes “how can you create an environment that is warm, nurturing, safe, where this child can then grow and become a learner.”

If education is in part about socializing children as future employees, parents, and leaders, teachers in minority communities must be aware of “code switching,” or what is normal behavior in home communities versus what is an acceptable way to walk, talk, dress and act in job-seeking or at a work place, said Spinola. “Those of us who can do that successfully, we get to have this other world, and those who don’t remain where they are.”

Teresa Harvey-Jackson, principal of the Marshall Elementary School in Boston, came to the seminar looking for ways to help her teachers reach out to students. “I really want to empower them to own these relationships with children,” she said. “Kids work with teachers they have relationships with. Our kids want to please the adults.”

Centhelia Jones, a kindergarten and after-school teacher with the Gardner Pilot Academy in Allston, said she wanted  “to learn new ways, new practices, on how to reach these children in a more positive way.”

“Children come to school with a temperament. We have a temperament too. We’re not machines; we’re people,” she said. “We have to be role models for these kids, even at the point we’re ready to explode. So for me, coming here, it’s teaching me — even though I’m trying to learn for the kids — to see you’re the role model, you have to keep calm.”

“Mind in the Making,” authored by Ellen Galinsky and her colleagues at Families and Work Institute in New York, was used as a framework in the development of the Northeastern University course “Mind in the Making: Social, Emotional and Intellectual Learning Are Inextricably Linked.” The course allowed seminar participants to earn four graduate or three undergraduate credits and was funded by Northeastern and HASI.