When three is also one 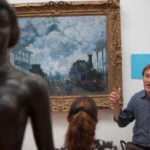 Art and the immigrants

When the Harvard Art Museums’ newly renovated and expanded facility reopens, probably in late 2013, it will better realize the dream of all those — art scholars and admirers alike — who envision Harvard’s dynamic collections operating in perfect tandem.

Once the project at 32 Quincy St. is complete, visitors for the first time will be able to experience the University’s three distinct art museums under one roof. The new project will bring together the Fogg, Busch-Reisinger, and Arthur M. Sackler museums on one site, increasing accessibility to the collections, enhancing curatorial collaboration, and further developing the role of the museums in Harvard’s undergraduate curriculum.

“One of the great drivers behind this project has been to bring our three collections, the Fogg, the Busch-Reisinger, and the Sackler, into much greater interaction with one another,” said Thomas W. Lentz, Elizabeth and John Moors Cabot Director of the Harvard Art Museums. “Bringing them into greater interactivity and greater dialogue will go a long way toward unleashing the vast potentials of this collection as a teaching and learning tool.”

But while the museums will be united under one roof and under the Harvard Art Museums umbrella moniker, museum officials are quick to note that each will retain an individual presence in the newly renovated and expanded space.

“No one should ever think that the Fogg, the Busch-Reisinger, and the Sackler are going away — they aren’t,” said Lentz. “Each will still have its own distinct identity and its own critical mass. But what we want to do is make the borders between these three museums much more porous.”

The new facility will encourage collaboration and interdisciplinary work. It will have increased gallery space, a dedicated study center for each of the three museums, classrooms, seminar rooms, a public education room, and state-of- the-art storage space. The Straus Center for Conservation and Technical Studies will occupy new space on the upper floors, and a 300-seat auditorium will be located on the lower level.

Relocating the Sackler Museum so that it is proximate to the Busch-Reisinger and the Fogg will also accomplish the University’s long-term goal of allowing visitors to experience the Sackler’s celebrated collection of ancient, Asian, Islamic, and later Indian art in direct relation to the Western collections of the Fogg and Busch-Reisinger.

Arthur M. Sackler, who died in 1987, was a physician known for pioneering research and was also a committed philanthropist who was passionate about art­, particularly Asian art and its importance on the world stage. In the 1980s, the New York native gave millions to Harvard to create an appropriate setting for its collection of Asian art.

The building in which the Sackler is now located is the work of British architect James Stirling, and is one of only five buildings that Stirling completed in the United States during his career. Renowned for his postmodern style, Stirling is considered one of the most influential and innovative architects of the 20th century.

But one important feature of the building plan never came to fruition. At the building’s main entrance on Broadway, two massive concrete cylindrical centurions flank the front door. Above them hovers a large square window. Those flourishes were meant as much for function as for flair — Stirling’s original design included a pedestrian passage that would span the busy Broadway below and act as a walkway, gallery space, and a connection to the Fogg. The concrete columns were part of the planned support for this elevated gallery, and the large window was to have been the central entrance to the building. But local opposition in the 1980s put a halt to the plans and the linking of the three museums was never completed.

Over the years, visitor numbers have shown that the Sackler, by virtue of its separate location, was being sadly overlooked.

“What we found was that far fewer people were going to the Sackler Museum just because it was across the street,” said Daron Manoogian, director of communications for Harvard Art Museums. “When both the Fogg and the Busch-Reisinger were open at 32 Quincy St., the Sackler was receiving about one-fifth the amount of visitors.”

In the new configuration, the Sackler will occupy a prominent location at the corner of Broadway and Prescott, and visitors will be able to move seamlessly among the museums, making connections and expanding their visual horizons as was originally intended.

Visitor experiences also will be enhanced by some long-awaited amenities. The original entrance to the Fogg on Quincy Street and a new public entrance on Prescott will lead visitors into the central courtyard, where they will find a new café and museum shop. A large central stairway and new elevators will make all five floors of public space easily accessible for all.

“The new facility will be a major new platform for the visual arts at Harvard that puts our great collections in greater alignment with the University’s educational mission,” said Lentz.

While the renovation and expansion project is under way, the Stirling building is open, displaying a variety of objects drawn from the collections of the three museums. University officials are working with museum officials and members of the Faculty of Arts and Sciences to ensure that after the new facility is completed, the Stirling building, which will continue to bear Sackler’s name, remains dedicated to the visual arts.