The threat of nuclear terror 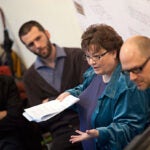 Schools of the future

Researchers from the United States and Russia issued a joint assessment Monday (June 6) on the global threat of nuclear terrorism, warning of a persistent danger that terrorists could obtain or make a nuclear device and use it with catastrophic consequences.

The first joint threat assessment by experts from the world’s two major nuclear powers concludes: “If current approaches toward eliminating the threat are not replaced with a sense of urgency and resolve, the question will become not if but when, and on what scale, the first act of nuclear terrorism occurs.”

The study recommends measures to tighten security over existing nuclear weapons and the nuclear materials that terrorists would need to make a crude nuclear bomb, along with expanded police and intelligence cooperation to interdict nuclear smuggling and stop terrorist plots. The report also calls for improved protection of nuclear facilities that might be sabotaged, and of radiological materials that might be used in a dirty bomb.

The “The U.S.-Russia Joint Threat Assessment on Nuclear Terrorism” report, released in Cambridge and in Moscow, results from a nearly yearlong partnership by authorities on nuclear security from the Belfer Center for Science and International Affairs at Harvard Kennedy School and the Institute for U.S. and Canadian Studies in Moscow, a leading Russian research center.

The lead U.S. and Russian authors are Rolf Mowatt-Larssen, a senior fellow in the Belfer Center and a former director of intelligence and counterintelligence at the U.S. Department of Energy, and Pavel S. Zolotarev, a retired army general who is deputy director of Moscow’s Institute for U.S. and Canadian Studies, and former head of the Information and Analysis Center of the Russian Ministry of Defense.

“If you look at the U.S. and Russia together, we own about 90 percent of the problem — more of the weapons, less of the nuclear materials. So it’s only right that these two countries share their expertise and look hard at ways to work together to lower the risks,” said Mowatt-Larssen. “The United States and Russia have never produced a document that could be said to represent a common understanding of the nuclear terrorism threat. This can now be used as a basis for driving action in both governments.”

“Russia and the United States have paid more attention to nuclear weapons and nuclear deterrence,” Zolotarev said, “even though neither of our two countries has a political need to rely on mutual nuclear deterrence any longer. As a result, we pay insufficient attention to the threat of nuclear terrorism, which constitutes a more real threat than the enormous arsenals of nuclear weapons in both countries. The threat of nuclear terrorism is increasing. Our response should anticipate the dynamics of the threat rather than lag behind it.”

The researchers’ joint assessment was reviewed and endorsed by a group of retired U.S. and Russian senior military and intelligence officers, led by Gen. Anatoliy S. Kulikov (a former interior minister) and Gen. Eugene E. Habiger (former head of the U.S. Strategic Command). This “Elbe Group” was established last October to create an informal communication channel on security issues of concern to both the United States and Russia.

The joint threat assessment was coordinated by the Kennedy School’s U.S.-Russia Initiative to Prevent Nuclear Terrorism, which is directed by William Tobey, a senior fellow in the Belfer Center and former top official in the National Nuclear Security Administration. The assessment project was supported by the Nuclear Threat Initiative, a nonprofit organization in Washington that works to reduce threats from nuclear, chemical, and biological weapons.

“The joint threat assessment accomplishes something that so far governments have been unable to do: gauge the threat of nuclear terrorism from differing national perspectives, and thereby form the basis for effective action to defeat it,” said Tobey. “This will help to overcome the No. 1 barrier to improved nuclear security — complacency.”

The assessment examines potential terrorist pathways to a nuclear attack, among them buying or stealing an existing weapon, or getting highly enriched uranium or plutonium and fashioning a crude nuclear bomb of their own, which the study warns is distressingly plausible.

The joint report documents that al Qaeda has been working for years to acquire the materials and expertise needed to make a crude nuclear bomb, getting as far as carrying out explosive tests for their nuclear program in the Afghan desert. The report outlines the steps that terrorists could follow and envisions how such a terrorist plot might be structured — and how countries should work together to stop it.

The study notes that, in addition to al Qaeda, terrorists from the North Caucasus region remain committed to carrying out catastrophic attacks, have carried out reconnaissance at nuclear weapons storage sites, have plotted to hijack a submarine with nuclear weapons on board, have planted radiological materials in Moscow, and have repeatedly threatened to attack nuclear power plants. These groups include factions in Chechnya, Dagestan, Ingushetia, and elsewhere.

Among the assessment’s recommendations:

English and Russian language versions of the complete report are available.