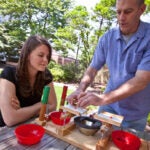 At a glance, a painting by Jackson Pollock can look deceptively accidental: just a quick flick of color on a canvas.

A quantitative analysis of Pollock’s streams, drips, and coils by Harvard mathematician L. Mahadevan and collaborators at Boston College reveals, however, that the artist had to be slow — he had to be deliberate — to exploit fluid dynamics in the way that he did.

The finding, published in Physics Today, represents a rare collision involving mathematics, physics, and art history, providing new insight into the artist’s method and techniques, as well as his appreciation for the beauty of natural phenomena.

“Our article is mainly an invitation to think about some aspects of art from a scientific perspective,” said Mahadevan, who is the Lola England de Valpine Professor of Applied Mathematics at Harvard’s School of Engineering and Applied Sciences (SEAS) and a professor of organismic and evolutionary biology and of physics.

Crossovers between art and science are nothing new. Consider, for example, Leonardo da Vinci’s botanical sketches, proportional studies, and flying machines (or, for that matter, the culinary artistry of today’s molecular gastronomists).

“My own interest,” said Mahadevan, “is in the tension between the medium — the dynamics of the fluid, and the way it is applied [written, brushed, poured …] — and the message. While the latter will eventually transcend the former, the medium can be sometimes limiting and sometimes liberating.”

Pollock’s signature style involved laying canvas on the floor and pouring paint onto it in continuous, curving streams. Rather than pouring straight from the can, he applied paint from a stick or a trowel, waving his hand back and forth above the canvas and adjusting the height and angle of the trowel to make the stream wider or thinner.

Simultaneously restricted and inspired by the laws of nature, Pollock took on the role of experimentalist, ceding some control to physics to create aesthetic effects.

Mahadevan, collaborating with art historian Claude Cernuschi and physicist Andrzej Herczyński, both at nearby Boston College, took an interest in Pollock (1912–56) when his colleagues suggested that the artist may have exploited the same aspects of fluid dynamics that Mahadevan has studied in the past.

Instabilities in a free fluid jet can form in a few ways: The jet can break into drops, it can splash upon impact with a surface, or it can fold and coil, as when a stream of honey lands on a slice of toast. Artist Robert Motherwell produced drips and splashes by flicking his brush; Pollock’s technique, on the other hand, is defined by the way a relatively slow-moving stream of paint falls onto the canvas, producing the trails and coils.

In a sense, the authors said, Pollock was learning and using physics, experimenting with coiling fluids quite a bit before the first scientific papers on the subject would appear in the late 1950s and ’60s.

Quantitative explanations for what are now termed inertial, gravitational, and viscous coiling regimes are relatively recent findings, emerging only in the past few decades. Mahadevan has studied the coiling of honey, nanofibers, and rope, and the behavior of a dripping faucet, among many other aspects of soft-matter physics.

Mahadevan and his co-authors examined the black and red painting “Untitled 1948–49” and demonstrated mathematically that the only way Pollock could create such tiny looping, meandering oscillations was to hold his brush or trowel high up off the canvas and let out a flow of paint that narrowed and sped up as it fell. To create tiny loops rather than waves, he likely moved his hand slowly, allowing physics to co-author his art.

The artist, of course, must have discovered the effects he could create through experimenting with various motions and types of paint, and perhaps some intuition and luck. But that, said Mahadevan, is the essence of science.

“We are all students of nature, and so was Pollock,” he explained. “Often, artists and artisans are far ahead, as they push boundaries in ways that are quite similar to, and yet different from, how scientists and engineers do the same.”

Pollock’s work and physicists’ modern understanding of natural phenomena blur the line between art and science, the authors said.

The authors wonder whether a quantitative understanding of fluid dynamics could inspire a new style of art that takes Pollock’s medium a step further. Using a can of paint with a thin slit in one end, they suggest, an artist could paint with a film of pigment rather than a jet, creating aesthetic effects.

“There are interesting quantitative questions everywhere in art,” said Mahadevan. “One that currently fascinates me is inspired by the Chihuly exhibition at the Museum of Fine Arts in Boston, not only because of the beauty of the glass-blowing forms, but also because it presents analogies to problems in biology and physics that span scales from the cell [in the context of cell shape] to the whole Earth [in the context of magma and lava flows].”

“Of course, another, much harder, problem,” he said, “is the notion of ‘beauty’ in art or science, which we all can recognize but find hard to quantify.”