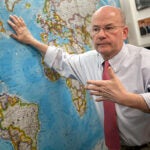 The battle of the butts

The infrastructure is now in place to use new informational technologies in the American health care system effectively. But a former White House official tasked with improving health care technologies said the challenge is to ensure that innovations do not deepen existing disparities in health care, and instead provide care more effectively across communities.

David Blumenthal, who until last month was national coordinator for health information technology, outlined the potential and the pitfalls of additions such as electronic health records as part of the Reede Scholars’ Second Annual Health Equity Symposium on May 12.

His was “not a program about technology, although health technology is in the title; this is a program about health care,” said Blumenthal, the Samuel O. Thier Professor of Medicine at Harvard Medical School, during the program on “eEquity: Leveraging Technology to Achieve Health Equity.”

“It operates under the assumption that information is the lifeblood of medicine and that we are only as powerful as the information we have, whether we are a nurse practitioner, a physician, or a respiratory therapist.”

Still, “there is the enduring observation that new technologies do not disseminate evenly in our society,” Blumenthal said. From imaging devices to new asthma treatment, such innovations reach some vulnerable populations later than others.

Yet Blumenthal emphasized the progress made. A significant market in producing health information technology programs has emerged, sparked by a new incentive program, he said.

This has “created a market where there hadn’t been a market before for the use of health information technology,” Blumenthal said.

About 7,000 students have been enrolled in 84 community college programs to receive training that will support new medical information technology, he added, saying, “There is increasing coordination between this high tech agenda and the health reform agenda.”

Even with the explosion of new products, Blumenthal warned that minority groups may be slower in reaping the benefits of such innovations as electronic medical records.

“We can make these efforts through central governmental intervention, but the best long-range solution … is to level the playing field in the health care system as a whole,” he said. “What we need is more of the kind of leadership that brought us health reform.”

During a question-and-answer period, Blumenthal made a key observation: “What you have to realize is that everyone you run into who has been paying taxes, has put $100 toward the adoption of electronic health records. Every man, woman, and child in the U.S. is paying $100 for this to happen.

“I think that’s a pretty good deal for providers. I think this is a unique investment and an amazing commitment that is really up now to providers to deliver.”

The symposium, which was moderated by Lenny Lopez, an internist trained at Brigham and Women’s Hospital, featured remarks by Joseph R. Betancourt, director of the Disparities Solutions Center. There were presentations by Quyen Ngo-Metzger, data branch chief in the Bureau of Primary Health Care at Health Resources and Services Administration; by oral surgeon Elsbeth Kalenderian on improving links between medical and dental practices; and by John Moore, a Ph.D. candidate in the New Media Medicine group at the MIT Media Lab, on possible new devices.

Moore wowed the audience with a peek at emerging technology aimed at educating and empowering patients by, for example, letting them see and manipulate visual data on the effect of medication in their bloodstream, or by a stethoscope that would let doctors and patients hear heartbeats. The goal — something underscored by questions from the audience — was to replace the scenario of a doctor staring at a computer screen to one in which physician and patient look at data together to develop medical regimens.