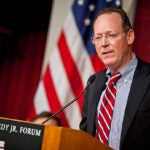 Social change was the theme of this year’s Radcliffe Day, the traditional event that follows Harvard’s Commencement ceremonies, during which present and past affiliates of the Radcliffe Institute for Advanced Study gather to celebrate its accomplishments and ponder future goals.

The highlight of the session Friday (May 27) was the awarding of the Radcliffe Institute Medal, which is given to someone whose life and work have benefited society. This year’s recipient was Ela Bhatt, who has dedicated her life to helping women in India lead more empowered, more fulfilled, and healthier lives.

“Transformation comes from within,” said Bhatt, whose union work with the Self Employed Women’s Association (SEWA) of India has transformed the lives of more than a million women in her country.

In 1972, Bhatt founded SEWA to help protect women from unfair, exploitative labor practices. The women she organized were part of the informal sector, working in fields such as construction, agriculture, and domestic labor. Her organization now has 1.3 million members and has grown to offer services such as micro-loans, health and life insurance, and child care, all overseen by more than 100 women-run cooperatives.

“When women have an income of their own, they are able to fight their own battles in their own way. For that, economic freedom is the key,” said Bhatt.

Although her workers still occupy the “margins” of society, “it’s from the margins,” said Bhatt, “that real transformation comes to the center.” Successful, supported work isn’t just the key to economic freedom, said Bhatt. It gives people roots, builds communities, gives meaning to life, and is “the foundation of peace.”

“In my experience,” said Bhatt, “women are the key to building holistic communities.”

Known as the gentle revolutionary, Bhatt’s philosophy mirrors that of Indian political leader Mahatma Gandhi, who guided the nation to independence from Britain through a policy of determined, nonviolent resistance.

Gandhi’s message “was easily acceptable by the local common people,” said Bhatt in an interview earlier in the day. His wisdom, she said, derived “from the wisdom of soil,” and from simple traditions like “truth, the dignity of labor, looking at the cost of human values, and simplicity.”

Simplicity, she said, was the value she admired most. It’s not always the case, said Bhatt, that “complexity is progress.”

In the morning, Radcliffe fellows, friends, and former students gathered at the American Repertory Theater’s Loeb Drama Center for a panel discussion titled “Making a World of Difference.”

One panelist was Abigail English ’71, RI ’11, the 2010-11 Frieda L. Miller Fellow at the institute, whose research examines the sexual exploitation and trafficking of adolescents. She said transformative social change hinges on two concepts.

“It requires empowering a sense of a personal stake in the well-being of others,” she said, as well as creating “a sense of hope that action can make a difference.”

Lani Guinier ’71, the first woman of color appointed to a tenured professorship at Harvard Law School, and Bennett Boskey Professor of Law, said she looks to her students for inspiration.

“Social change,” she said, comes in part from identifying and collaborating with “young, energized spirits who are moving in the right direction.”

During the afternoon luncheon, held under a tent in Radcliffe Yard, outgoing Dean Barbara J. Grosz received a standing ovation from the crowd and words of praise from Harvard President Drew Faust, herself a former Radcliffe dean.

Faust lauded Grosz, who is also Higgins Professor of Natural Sciences at the School of Engineering and Applied Sciences, for further integrating the institute with the University, and with other academic fields, particularly science.

“She has made [science] an absolute core part of this institution in ways that have been imaginative and innovative and now are essential to the Radcliffe Institute’s identity,” said Faust.