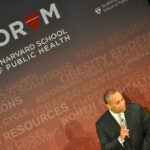 Chris Christie gave his audience fair warning. The famously frank governor of New Jersey, renowned for his harsh rhetoric, was ready, if need be, for a fight.

He said he was open to polite, respectful disagreement and dialogue, but he was also quick to caution his listeners during the question-and-answer session at the Harvard Graduate School of Education on Friday (April 29).

“If you decide today is the day that ‘I am going to kick the disrupter around,’ let me remind you, I am from Jersey,” he said to laughs, referencing the moniker recently given him by the New York Times. “And in Jersey,” he added, “one good kick deserves another.”

But Christie had little need to worry about attacks from the crowd.  The audience at Longfellow Hall was receptive, frequently applauding his hard-hitting style.

A willingness to talk tough is paramount when it comes to issues involving public education, said the governor, who has proclaimed 2011 the year of education reform for his state.

“In my view, this is the biggest fight we can have.”

Christie rose to prominence in 2009 when he narrowly beat out Democratic incumbent Jon Corzine for the governorship. Since then he has taken on the public sector unions, launching an attack on their pensions and benefits plans in an effort to balance the state’s budget.

New Jersey’s powerful teacher union sits firmly in his crosshairs. During his talk, sponsored by the school’s Education and Policy Management Student Association, he discussed his efforts to rein in union spending and the need for “revolutionary” reform in the state’s K-12 public education system.

Christie’s road to reform includes an overhaul of public school teachers’ tenure system. Such tenure, he argued, should be tied directly to a teacher’s performance, not simply to the length of time in the system. Teachers who consistently perform well would keep their tenure, while those who receive poor evaluations would have their tenure status revoked, with an opportunity to earn it back with improved performance.

“I want that tenure to be earned, and not earned just once …  but earn it every year.”

Teacher evaluations should also be reworked, said Christie, who has called for teacher performance to be based on a combination of student test scores, teacher practice, and student performance in the classroom. In addition, a teacher’s pay should be based on a solid evaluation system, not on seniority, as in the current system.

Greater school choice is also a part of Christie’s education reform. He called a system in which a child’s destiny is determined by his or her zip code “un-American.”

The governor also urged students in the crowd to “take chances, take a little risk,” to help improve the nation’s public school systems.

“If you don’t do it, we’ve got no hope. If you are sitting up here at Harvard getting a graduate education in one of the greatest universities in the world, a place of great privilege and great opportunity, if you are unwilling to do it, we’re sunk.”

Christie’s only challenge came from a young woman in the audience who wondered if his aggressive tone and use of terms like “disrupter” and “battle” and “fight” prevents a more open dialogue with the unions.

While he admitted that he has “struggled with it a lot more than people would suspect,” Christie maintained that tough talk is needed to get the public’s attention.

“I am prepared to ratchet down the rhetoric,” said Christie, “if I could get any indication that there is any interest in changing the failed system.”