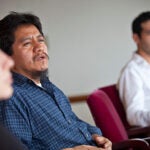 Amy Brenneman ’87 knows what life is like in the spotlight. Famous for starring roles in the television series “Judging Amy” and “Private Practice,” the actress is well versed in the glamour, glitz, and red carpet “Kabuki ritual” that come with the Hollywood territory.

Brenneman also knows about life under the gaze of the camera while in constant pain. Having suffered for years, she recently underwent surgery for ulcerative colitis when the illness reached a crisis point in 2010.

But adversity spelled creativity for the Connecticut native who chose to bring her story to the stage.

In her new autobiographical theater piece “Mouth Wide Open,” she reveals her personal struggle for balance and spirituality amid the pressures of celebrity and illness. The show is on a limited run at the American Repertory Theater’s (A.R.T.) Loeb Drama Center.

A comparative religion major at Harvard, the actress said spirituality has been a constant theme of her life, one related directly to what she calls the “sacred art” of acting.

“Directors yell ‘action,’ and I am doing my holy rite,” she said. “I just know that in my bones something really special happens.”

Written by Brenneman and co-created and directed by her longtime collaborator Sabrina Peck ’84, “Mouth Wide Open” draws on Brenneman’s experiences, taking the audience to locales as diverse as an evangelical church, a Native American Indian reservation, a Buddhist monastery, a hospital room, and the red carpet. The work grew out of Brenneman’s writings and blog entries that “all had a certain theme of everyday transcendence — these personal ‘aha’ moments when your own personal heavens open up, and you learn something new.”

Returning to the A.R.T. represents a type of homecoming for the show’s star and its director. “I had love affairs, l wrote papers, I lived on the Loeb stage,” recalled

Brenneman, whose love for acting intensified while at Harvard. She performed in a number of productions as an undergraduate and co-founded the Cornerstone Theater Company, a touring production troupe that brings contemporary and classic plays to American towns and encourages the community to get involved.

Peck’s interest in the arts also developed in tandem with a strong interest in community. While at Harvard, she created CityStep, a performing arts program that brings teams of undergraduates into public schools to teach and perform with kids.

(When she was nearing graduation, Peck chose a young, energetic student to help lead the program: namely, Diane Paulus, the current artistic director of the A.R.T.)

Brenneman and Peck forged a connection during Brenneman’s first semester of her freshman year, working on the musical “Working” at the Loeb, followed by collaborations on several productions for the Cornerstone Theater.

They developed “Mouth Wide Open” during a residency at The Yard on Martha’s Vineyard last summer. The piece was updated for the A.R.T. production. Over the last year Brenneman added to the work, expanding on her experience with illness.

But the physicality of the show hasn’t changed. Drawing on her training in dance, Peck wove elements of movement throughout the work to “convey what words cannot in certain moments.”

“At one point, we use movement to explore [Amy’s] journey down the red carpet … and how distorted the body really has to be in those poses for her to achieve the seemingly relaxed and effortless look,” Peck said.

As Brenneman’s illness progresses, the show revisits the red carpet and uses movement “as a metaphor,” said Peck, “for the torture that [Amy] is experiencing.”

“As an actress — and a human being — Amy is always interested in what’s beneath the surface. She is one of those people who brings you instantly to the heart of an emotional issue. … She is so powerful with such a great sense of relaxation and command of the stage. She is just an extraordinary performer.”

“Mouth Wide Open” will be performed at the Loeb Drama Center, 64 Brattle St., Cambridge, Mass., May 24-29. For more information.