The influence of neighbors 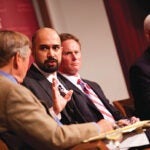 Where we live and who we know can affect voting patterns

Ryan Enos is out to prove that how people naturally organize themselves in the space they live in can have huge political significance.

According to Enos, an assistant professor of government at Harvard, the space you live in and who is around you could affect your political behavior. “It’s not just where people live, it’s who else lives there with them. People spend a lot of time studying how diversity affects behavior, but we’re paying little attention to how we conceptualize the space around that diversity and that behavior.”

But Enos is quick to point that this new diversity may not be all it’s chalked up to be. “People have preconceived ideas about how the diversifying of cities is going to affect interracial ideas and relations,” he said. “We have to stop and say that just because a new minority is moving into the same city doesn’t mean they’re actually going to be in the same space in that city as the old residents.”

“My claim is that these neighborhoods, this natural segregation into which people separate themselves, has political significance. Who you live near can affect whom you vote for and how often you vote.”

Enos put his claim to the test in 2008 and 2009 in the field of Los Angeles, where he was living at the time. “It’s a fascinating city to study,” he said enthusiastically. Los Angeles was a particularly good testing ground for Enos’ hypothesis because the population is not only rapidly diversifying but also has “meaningful levels of racial segregation.” Enos began by studying mixed neighborhoods, asking people what they thought of their new neighbors. “I had a good awareness that something was going on between the minority groups, and you didn’t have to dig far below the surface to feel the tension,” he said. “Many of the African Americans I interviewed said they vote because of fear of immigration from Latinos. Latinos are the new incoming competition for work.”

Enos wanted to see how this tension would manifest itself politically. After accessing the voter files of residents in significantly African-American and Latino census “block groups” (meaning they were from the same area), he sent letters to both groups, highlighting areas on the map of the recipient’s block and the block nearby, and indicating the average frequency of voting on both these blocks.

“I said nothing about race in these letters,” he said. “I made an assumption that these people would have a good enough mental image of their area to know which blocks were dominated by which ethnicities.” Enos checked the same residents’ records after the next election to monitor changes in voting behavior.

Ultimately, the effect he found was that when African Americans received a letter that highlighted a Latino block close to them, and thus were more aware of the Latinos in their area, the African-Americans’ voting numbers shot up 10 percentage points. The same effect was not found in reverse; Latinos did not vote in higher numbers in either condition.

“To me, this kind of reinforces the idea that these groups aren’t in conflict, but African Americans feel they are being displaced. The change in voting numbers could be pushback due to economic competition.”

To Enos, and to those who witnessed the changes, the influx of Latinos to the cities closely parallels the process in the ’60s when African Americans were moving into cities, and there was a “backlash” from the new working-class whites. However, this time around, according to Enos, there’s one key difference: “African Americans have a history of knowing what it’s like to be the oppressed minority. They seem to always place themselves between Latinos and whites. They have sympathy for the new minority; they’ve been there. But they’re still competing with them for jobs.”

Enos says it’s hard to see how this is going to play out. “It could have big implications. For instance, since we only have two political parties in the United States, there are necessarily a lot of different types of people in both those parties, and as the U.S. becomes increasingly diversified, so will those parties. We might see a sort of coalition of minorities.”

But again, Enos notes that history repeats itself. “We saw something similar in the ’60s: the fracturing of the New Deal coalition,” he said. “Southern whites, who had traditionally made up the Democratic Party, fled to the Republicans when African Americans began to join. The Democrats saw a lot of their regular voters replaced with racial minorities who don’t vote as often, and thus we saw the decline of Democratic dominance. From 1968 onward we’ve been in a period of Republican domination of electoral politics, even with Democratic presidents.”

Enos predicts the Democrats could face a similar problem moving forward. “These two groups are in conflict now, but since the Republicans have driven them out of their party, they’ve both become increasingly Democratic voters. Can they coexist? Would Latinos ever stop voting Democratic? Would African Americans ever vote Republican? It might sound crazy now, but if you go back in time, no one would have ever predicted that blacks would leave the party of Lincoln to join the party of Southern segregation.”

Whatever the outcome, it’s clear that the question of race will not leave the political field for a long time. “Segregation is a social factor,” Enos said, “and it’s often interrelated with political questions.”