The battle of the butts 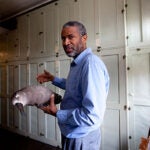 Official works to combat the global spread of smoking

To Professor Gregory Connolly of the Harvard School of Public Health, estimates that smoking may be banned in the United States by 2050 aren’t good enough.

“I want to see the last cigarette sold to a child by 2020,” Connolly said. “I want to accelerate that because I want to go to the party.”

Connolly, professor of the practice of public health and director of the School’s Center for Global Tobacco Control, heads a team of affiliated faculty members, students, and fellows conducting research in the United States and overseas on the health effects of tobacco use and on the effectiveness of interventions designed to stop it.

Just since the beginning of the year, Connolly and his colleagues authored publications covering secondhand smoke in Israeli bars, menthol cigarettes and Japanese women, and the attitudes of nonsmokers toward smoking in Greece, finding that the nonsmokers would work toward compliance with smoking laws. Together with colleagues, he has also published work on asthma and anti-smoking laws, smokeless tobacco, and electronic cigarettes. A research project is in the works, Connolly said, that will examine tobacco company documents available from the court cases against cigarette companies.

To fight tobacco globally, Connolly said, one has to be willing to travel. On a recent May day, he had just gotten off a plane after talking to a small group in Alaska and was anticipating an upcoming trip to Kuwait. Though he lectures extensively, Connolly said that research is key to the center’s activities. In every country, he said, it is important to conduct studies on smoking’s impact and on the effectiveness of interventions to bring the scope of the problem home.

It’s also important to communicate research results effectively, Connolly said, citing one 2006 project that examined air quality levels in Irish pubs around the world. The Irish Pub Study found that air pollutants were 91 percent lower in pubs actually located in Ireland — which has a nationwide smoking ban — than in Irish pubs in parts of the world where smoking was allowed. Released on St. Patrick’s Day, the study received broad media coverage.

More recently, Connolly has been working closely with officials in Greece, which has the world’s highest smoking rate, and in Middle Eastern nations such as Kuwait.

Connolly, whose initial training is in dentistry, has a long history fighting for smoke-free air. Before coming to Harvard’s Department of Society, Human Development and Health in 2005, he worked for 10 years as director of the Massachusetts Tobacco Control Program and then for two years as a scientific adviser to the program. The state program was successful at reducing tobacco consumption in Massachusetts by 60 percent between 1994 and 2004 and in reducing the portion of the state population that smokes from 24 percent to 14 percent.

Statistics from the U.S. Centers for Disease Control and Prevention say that though smoking is declining in this country, tobacco use still is responsible for one in five U.S. deaths each year, killing 443,000 people. Worldwide consumption continues to rise, meanwhile, with 80 percent of smokers now in low- and middle-income countries. Deaths related to tobacco use worldwide are expected to rise from 5 million presently to 8 million by 2030. The global spread of tobacco use falls squarely on this country’s shoulders, Connolly said, calling it “one of the sins of the 20th century.”

In addition to research, Connolly is wielding another weapon in the fight against tobacco: HSPH students. Each year he trains a postdoctoral fellow and three master’s or doctoral students. These students often take leadership positions in public health programs in the United States or elsewhere. One result of the spread of international students whom he has trained is that he has to field phone calls at odd hours of the night, but Connolly said that’s a small price to pay.

There have been several major positive developments in the fight against smoking-related illnesses in recent years. In 2003, 171 nations adopted the Framework Convention on Tobacco Control, which aims to manage tobacco supply and consumption globally. In the United States, the government gave the Food and Drug Administration the power to regulate tobacco for the first time in 2009. With that weapon, Connolly said, the FDA could deal with the tobacco problem once and for all by regulating the addictive ingredient nicotine, reducing it from 7 milligrams to the harmless level found in say, a tomato — 0.3 milligrams.

“If I was head of the FDA, the meeting [to solve the tobacco problem] would take about an hour,” Connolly said.