Planning a life for others 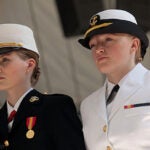 Harvard in the military

After Harvard, a commitment to service

Jeffrey Lynn Hall Jr., who graduates from Harvard College today (May 26), grew up in the historically black western border of St. Louis — “a completely different world” from the buffed up areas of the city closer to Washington University, he said. “You notice a stark difference.”

But his childhood was comfortable. “We had plenty on top of plenty,” said Hall, and academics were important from primary school on. “My mom always said that if my sister and I brought her A’s and B’s, we would get A and B privileges.”

The constraints of a divided city were hard to miss. “In my childhood I noticed a lot of discrepancies,” said Hall. The family had to leave the neighborhood to shop, for instance, and grass grew in sidewalk cracks more than on lawns. But young Hall found his refuges: a safe home, a loving mother, and an attentive grandfather “who schooled me a lot on the intangibles of life.”

At the Hempstead Accelerated School, Hall was at the head of every class through fifth grade. He remembers with gratitude that black history — proof that achievement is not a matter of race — was not just on the curriculum, but “a part of everyday discourse.”

Hall learned adaptability at McKinley Classical Junior Academy, a middle school for the gifted, because once in a while he was no longer at the top of the class. “There were so many stellar students,” he said, “I was no longer the lone star.”

At Soldan International Studies High School, Hall earned a nearly perfect grade point average, was commander of the Air Force Junior ROTC unit, captained both the football and wrestling teams, and by his senior year was one of the school’s four Gates Millennium Scholars.

Hall got an expanded view of cultural diversity at Soldan, where about a third of the students were from other countries. He also debunked the myth that “learning is not cool” in inner-city schools. Support for his achievements came from everywhere, said Hall, even from fellow students “struggling with the fads of the streets.”

It was a surprise for Hall to see a recruiter from Harvard — Senior Admissions Officer David L. Evans — show up at Soldan in the fall of 2006. “You always hear about Harvard in the movies and on television,” Hall said, and getting accepted seemed like a dream. “But there were many people who told me not to close any doors before they were open.”

By that spring, Hall was the first student in 30 years admitted to Harvard from a mainstream public school in St. Louis.

His freshman year brought another surprise, an atmosphere of academic rigor he compared to “going from zero to 100 miles an hour, immediately.” After flirtations with the sciences and with government, Hall settled on a concentration in social anthropology. “I appreciate the depth of its perspective,” he said, and the attention it brings to the voices of the powerless.

Social anthropology also led Hall to Ecuador last fall. He took a full course load in Spanish in Quito, studied microfinance, and lived for six weeks in the Chota Valley, whose Afro-Ecuadorean inhabitants are descended from enslaved Africans of the colonial period.

Hall called the four months in Ecuador “the most powerful experience I ever had,” in part because of the new friendships he made “across ethnic, racial, and linguistic boundaries.”

In the end, Hall considered his getting into and through Harvard the work of others as much as his own, so he wants to give back. “I want it to be all for someone else,” he said of his education.

Hall knows it won’t be easy. “There’s a constant battle between my desire to serve and the comforts my education may afford me,” he said. “This is the grand conflict.”

In June, Hall starts a two-year fellowship with the Equal Justice Initiative in Alabama. He will help mitigate the sentences of juvenile offenders in prison for life and study racial bias in jury selection and sentencing. “There’s a vast amount of wasted human potential in the justice system,” said Hall, and ex-convicts face bleak futures — like the future he feels could easily have been his own.