Nuclear threats, then and now 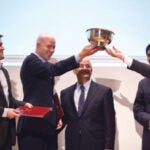 In 1985, researchers at the Harvard Kennedy School published a book called “Hawks, Doves, and Owls,” and gave it an ambitious subtitle: “An Agenda for Avoiding Nuclear War.”

Those scholars gathered again at the School on Monday (May 16) for a seminar on the current challenges in avoiding nuclear war — and to marvel at just how drastically the nuclear threat has morphed in the two decades since the Cold War ended and the Soviet Union collapsed.

The bottom line is that the Avoiding Nuclear War Project got a lot right, not least in recognizing that the real danger of igniting a nuclear war lies not in calculated military judgments but in misperceptions, irrational acts, and human mistakes. The group’s recommendations to take steps to “lengthen the nuclear fuse” and reduce the risks of accidental war remain core elements of U.S. nuclear policy.

But the four nuclear policy veterans on the panel — Graham Allison, Joseph S. Nye Jr., Ashton B. Carter, and Albert Carnesale — also acknowledged many unanticipated changes in the nuclear landscape. Nye said that few experts in the mid-1980s imagined a world without a Soviet Union within a decade, and the consequent danger of loosely guarded nuclear materials. Nor did they anticipate that terrorist organizations such as al Qaeda would declare their intention to obtain and use nuclear bombs.

Nye, the Harvard University Distinguished Service Professor, said, “If any of us thought that within a decade, there would be no Soviet Union, none of us got that. … We social scientists pat ourselves on the back, but what we know is fairly limited.”

The seminar was part of a two-day tribute to Nye organized by former students and fellows, some of whom took part in the ’80s project and are now respected academics and government officials.

The panel took its title, “Avoiding Nuclear War: Hawks, Doves, and Owls, Then and Now,” from the first book published by the project, which was co-edited by Allison, Carnesale, and Nye.

Seeking to move beyond the traditional showdown between hawks and doves, the authors devised a third policy caricature, involving owls. In contrast to hawks who seek military dominance to deter war by “peace through strength,” and doves who view the arms race as provocatively aggressive, owls see irrational behavior and loss of control as unintended triggers of conflict. Owls focus on reducing those risks as the key to avoiding war.

Allison, who like Nye is a former Kennedy School dean and now is director of the Belfer Center for Science and International Affairs at the School, noted: “Owls eat hawks as well as doves.”

Carter took a leave from the Belfer Center to serve as undersecretary of defense for acquisition, technology, and logistics in the Obama administration. Carter sketched a clear intellectual path from the ’80s work of the Avoiding Nuclear War Project to the current U.S. struggle against terrorists seeking weapons of mass destruction (WMD).

Carter said one breakthrough idea in the ’85 agenda lay in thinking not only about nuclear arsenals but also about the “wiring of the arsenals,” and the organizational and psychological factors underlying the nuclear command and control systems.

“If you look at nuclear terrorism and the thinking about WMD, you can see that the focus on the materials is complemented by thinking about the people and the networks of terrorism,” Carter said. “That series of steps you can trace right back to hawks, doves, and owls.”

Carnesale, who also was a Harvard Kennedy School dean and went on to become Harvard University provost and then chancellor of the University of California, Los Angeles, recalled that the 1985 book declared: “We see no certain way to escape some reliance on nuclear deterrence.” He said that conclusion “holds up pretty well today.”

Nye pointed out that the ’85 study, and another publication by the project three years later called “Fateful Visions,” did not call for the abolition of nuclear weapons. He noted that there was disagreement then, as there is now, about whether getting to zero should be the overarching goal.

Nye said the more important objective in the mid-’80s was to get nuclear powers to back away from the hair-trigger ability to launch thousands of weapons of immense destructive power within minutes. “We thought of it as a timeline: How far could you back away from those bombs on the front line? But there was always some disagreement among us about whether as you got down to lower numbers — let’s say five, or one — whether the premium for cheating and for a crisis of instability would grow enormously.

“So if you could get away from bombs at the front line, and avoid proliferation, the question of whether you could get to zero, we never quite solved,” Nye said.

Nye said that should remain an aspirational goal, if not an operational one, in part because political climates can change in unexpected ways that make détente suddenly realistic. He recalled traveling to Argentina and Brazil in the ’70s as a State Department official and urging the two military dictatorships to forgo their nascent nuclear weapons programs. They scoffed at him then, but soon the military rulers gave way to elected successors, and the two nations did abandon their nuclear weapons plans. South Africa later made a similar leap.

Carter said the Obama administration had helped break through “a very loud disagreement between left and right” on nuclear policy because President Barack Obama “was able to distinguish between having zero and having less while retaining a credible deterrent for the United States.”

David Welch, a political science professor at the University of Waterloo in Canada who was a doctoral fellow with Nye and who co-organized the gathering, said the Avoiding Nuclear War Project had a powerful direct impact. He said former Soviet leader Mikhail Gorbachev’s cautious nuclear policy was heavily influenced by the thinking of adviser Georgi Arbatov, who had been involved in a number of project initiatives.