Harvard in the military 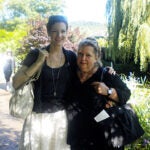 Two Marines are aboard ship in the Mediterranean, readying their platoons for combat. Another just returned from seven months of intense fighting in Afghanistan. One Army officer is now a Rhodes Scholar at Oxford. Another just learned an Afghan language. One Navy ensign has traveled the world and steered a battleship through a storm. Another is a student pilot in Florida.

These are just a few updates on the Harvard College graduates who in 2009 and 2010 left school as newly commissioned officers in the Army, Navy, and Marine Corps.

Marine 2nd Lt. Daniel West ’09 is now aboard a speedy amphibious ship in the Mediterranean Sea. With him on the USS Mesa Verde is 2nd Lt. Domenico Pellegrini ’09, a friend since their freshman year at Harvard. Both are platoon commanders with the ground combat element of the 22nd Marine Expeditionary Unit, poised “for any crisis that may arise,” said West, “whether humanitarian aid or kinetic combat action.”

Another 2009 classmate and marine infantry platoon commander is 2nd Lt. Joseph Kristol, who just returned from Afghanistan, “where his battalion saw some of the ugliest fighting to date in that country,” said West. Kristol serves with the 3rd Battalion, 5th Regiment — “3/5” — based at Camp Pendleton near San Diego. Last September, the unit arrived in the Sangin district of Helmand province, where Taliban flags flew everywhere, schools were closed, and local markets abandoned. Ahead of the 3/5 was a violent, seven-month grinder of combat — and the heaviest unit casualties so far in Afghanistan: 25 marines killed and close to 200 wounded.

“It is truly a privilege to serve with Marines in combat,” wrote Kristol, who coordinated fire support for his company — and had to write letters home to the parents of two machine gunners killed in action. “Unfortunately, I learned firsthand that privilege has a huge price.”

The Taliban flags, by the way, are gone.

From their ship, West and Pellegrini struck a common chord with other Reserve Officers’ Training Corps (ROTC) students who graduated from Harvard recently: They are grateful that relations have improved between their alma mater and the military. “It has been special to see the significant growth in relations between Harvard and the military since my freshman year,” wrote Pellegrini, “and I am lucky to have been a small part of it.”

Navy Ensign Joshua Foote ’10 echoed that sentiment, saying, “I’m absolutely thrilled about the recent developments in Harvard’s relationship with the military, and very excited to hear that the Navy is re-establishing an ROTC program there.”

On March 4, Harvard President Drew Faust and Navy Secretary Ray Mabus signed an agreement that will re-establish an ROTC formal presence on campus for the first time in nearly 40 years.

“Our renewed relationship affirms the vital role that the members of our Armed Forces play in serving the nation and securing our freedoms, while also affirming inclusion and opportunity as powerful American ideals,” Faust said at the time. “It broadens the pathways for students to participate in an honorable and admirable calling and in so doing advances our commitment to both learning and service.”

Under the agreement, Harvard will resume full and formal recognition of Naval ROTC on the effective date of the repeal of the law that disqualified openly gay men and lesbians from military service, which is expected to happen this summer.

Foote is stationed in Yokosuka, Japan, as a combat information center officer aboard the USS John S. McCain, a guided-missile destroyer. “The best way to explain,” he said of his job, “is to think of the dark, neon-lit room you see in the movies that’s full of radar screens and people talking on radios and drawing on boards.” He said, “I own that room, and about half of the sailors who work in there work for me.”

Foote has “been to Japan, South Korea, the Philippines, and Vietnam, and sailed in the Pacific Ocean, the Sea of Japan — and the Philippine, Yellow, East China, South China, and Sulu seas,” he wrote. “I have personally driven a multibillion-dollar warship a mile behind an aircraft carrier, at night, in the rain, with F-18 Hornets screaming overhead. … I’ve seen more stars in the night sky than can be seen anywhere on land, and the most beautiful sunsets you can imagine.”

Foote participated in the rescue effort following the earthquake and tsunami that recently struck Japan, and was part of the emergency mobilization after North Korea fired artillery shells into a South Korean town last year. All this, and more, happened less than a year after he wrote his last term paper and took his last exam.

Two of his 2010 classmates, also Navy ensigns, are in flight school in Florida: Christi Morrissey and Michael Kaehler.

While waiting for flight training to start, Kaehler lived the peripatetic life of a young officer. He worked briefly at an ROTC unit at the Massachusetts Institute of Technology, where since 1976 Harvard students have taken their cadet military training. Then he worked as a Navy recruiter in San Francisco before reporting to Pensacola in September, “about the same time I would have finished my study card for the fall semester,” wrote Kaehler.

He has since learned to pilot a Cessna 172, studied weather, flight rules, and the basics of aerodynamics, and has gone through survival training. “The most fun, surprisingly,” said Kaehler, was “getting strapped into a mock helicopter and dropped into a pool while blindfolded to practice escaping underwater from an aircraft.” He is now 12 flights into training on a turboprop T-34C, and will tackle aerobatics, night flight, and other requirements.

Army 2nd Lt. Roxanne Bras ’09 is tackling intellectual aerobatics as a Rhodes Scholar at Oxford. Still an active duty officer, she will graduate with an M.Phil. in international relations in 2012. From February through August of last year, Bras was deployed to Afghanistan as an officer in an engineering unit. In one picture, she had an M-16 slung on her back. But toward the end of her time in that country, Bras worked on issues involving Afghan women.

Travel, adventure, and challenge have come in all shapes for the eight Harvard ROTC graduates of 2009 and the 11 commissioned in 2010.

Army 2nd Lt. Josué “Josh” Guerra ’10 trained for three months last fall at the Muscatatuck Center for Complex Operations in Indiana. He was learning Dari, one of the major languages of Afghanistan. Since February, he has been at Fort Benning, Ga., to learn squad- and platoon-level tactics, which are “mentally and physically demanding,” he wrote, “though not overwhelming.” Guerra will report for duty at Fort Drum, N.Y, home of the 10th Mountain Division, a light infantry unit.

Marine 2nd Lt. Talya Havice ’10 has completed six months of officer training, and a five-month intelligence officer course. She is headed to Camp Pendleton in a few weeks.

Navy Ensign Olivia Volkoff ’10 is an engineer at Naval Reactors headquarters in Washington, D.C., where she is training on the design and maintenance of nuclear submarines and aircraft carriers. “This experience has left me totally in awe of the work it takes to take a ship from idea to construction to sea,” she wrote in an email.

Army 2nd Lt. Karl Kmiecik ’10 has started his medical training at the University of Texas Southwestern Medical School to become an Army doctor.

She is happy to be “directly applying the knowledge I gained at Harvard through my special concentration in ‘Understanding Terrorism,’” wrote Sinnott from Quantico, Va. “Nowhere else would I have been able to create such an interdisciplinary concentration, learning from experts in every academic field. With this basis, I am much more confident in how I will be able to approach the threat and aggressively address it.” After four months in Virginia, she will be stationed at Camp Pendleton near San Diego.

Foote said his Harvard education applies to the military life less directly, but still had a powerful positive effect.

“I met people from Harvard from every kind of background and learned how to interact with them and relate to them,” he said in an email from Japan. “This is essential for a naval officer.”

The intensity of those undergraduate years helped too, said Foote. “The workload is high, the tempo is fast-paced, and the standard by which your work is judged is exacting. Having entered such an environment with four years worth of experience as a student at Harvard, I was able to make the transition without difficulty.”

Tradition has helped too, he said. “In a less tangible way, Harvard’s longstanding history with the military has affected my service as well,” Foote wrote. “The men and women of Harvard have a tradition of service that dates to the Pequot War, and I have been and will continue to be honored to carry on that tradition.”