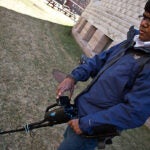 What did Pakistani officials know about the whereabouts of Osama bin Laden and when did they know it? Were they complicit — or dumb? Or smart at playing dumb?

Those questions were analyzed by a panel of foreign policy experts on Wednesday (May 4) at Harvard Kennedy School (HKS). With the international spotlight shifting from the killing of the al-Qaeda leader to the ramifications of his death, a key issue now is the future relationship between the United States and Pakistan, a sometimes tumultuous but often mutually beneficial partnership.

The U.S. administration may have faced two problematic conclusions: officials in the Pakistan military and/or its Directorate for Inter-Services Intelligence (ISI) knew of bin Laden’s location in a Pakistan community or they showed “a stunning degree of incompetence,” said Rolf Mowatt-Larssen, a former CIA intelligence officer and now a senior fellow at the Belfer Center for Science and International Affairs.

Let’s not pre-judge complicity, Mowatt-Larssen cautioned. The computers and other assets seized in the raid may well provide an answer.

Yet “if the degree of complicity is all the way to the top in ISI then that might be fatal to the relationship,” he said.

Despite its reputation as being all-knowing and all-pervasive, the ISI has “failed the country one time after another,” said Wajahat S. Khan, a Pakistani broadcast and online journalist and a fellow at the Shorenstein Center on the Press, Politics and Public Policy. He said he would not be shocked to learn that “maybe they just didn’t know. Because they can be that incompetent.”

It is also possible, Khan said, that Pakistan is acting according to a preconceived scenario to create ambiguity or plausible deniability. “Pakistan is doing what it is supposed to do: Step away from the crime scene and act dumb,”  Khan said.

Furthermore, Pakistan remains a key ally for the United States, said Bob Kinder, a retired U.S. military office, private consultant, and M.P.A. ’11 candidate focusing on national security studies. “We absolutely need the support of Pakistan in western Pakistan to help us with the Afghanistan problem. It is not a separate issue.”

As a former intelligence officer who worked with many foreign intelligence agencies, Mowatt-Larssen said, “It’s never because you love each other or were great buddies, although relationships are important, but you had self-interest. What’s going to [happen] in the coming weeks is very deep introspection and review of self-interest in a new light.”

Thus, the panelists cautioned against grandstanding and professing outrage over U.S. aid to Pakistan. Although, Khan said, “keep in mind that the money which this country’s taxpayers have been giving to Pakistan in the last decade has essentially gone to the wrong people.”

Kinder and Mowatt-Larssen said that the raid that killed bin Laden was an exceptional act for the United States.

“There is this image of the U.S. cowboy flouting international law,” Mowatt-Larssen said. “I can say in my experience in the government, these are very hard decisions; you’re actually putting your own people at risk. We come at them very deliberately really as a last resort. The default position is to work collaboratively.”

“Ideally, when you go into a sovereign nation, you want their blessing,” Kinder said.

Allison pointedly asked Khan how it felt as a Pakistani citizen to have a U.S. military action within his country’s borders.

“It feels like Mexico in the 19th century,” Khan replied. But he said he was “actually positive” about the nuanced response from American leaders about how Pakistan is also a victim of terrorism.

Still overall, Khan emphasized his pessimism about U.S. relations with Pakistan, saying the U.S. has a record of short-term attention, citing in particular, American disinterest after the Soviets were ousted from Afghanistan, a point that Allison also emphasized.

“Let’s not disengage. Let’s not get ahead of ourselves, ” Khan said.

Indeed, in the Q & A period, the panelists were asked if Pakistan might now see China as a more reliable partner than the United States. Kinder noted that Pakistan might be tilting to China because the two nations see India as a common enemy.

Will the killing of bin Laden push the United States to pull out of Afghanistan? Allison asked the panel.

If the U.S. pulls out now, al-Qaeda and the Taliban will move in, Kinder said.

“Al-Qaeda is not simply Osama bin Laden; it is a very diffuse organization that has spin-off affiliates all over the world, ” he said. “What America and President Obama are trying to do is a whole-government approach, not just focused on the security aspect but targeted economic and humanitarian aid. We are trying to do that in Pakistan but ultimately it’s up to that sovereign nation on how they spend that money.”