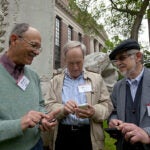 The Harvard Alumni Association (HAA) announced that Arne Duncan ’86 has been elected by his classmates to be this year’s chief marshal for Commencement. Selected from the ranks of the 25th reunion class, the chief marshal greets classes as they process into Harvard Yard, presides over the chief marshal’s spread, and selects “marshal’s aids” to help with various Commencement duties as part of the HAA’s Committee for the Happy Observance of Commencement (“The Happy Committee”). With a history dating back to 1899, the important post of chief marshal has been held by many notable alumni including Franklin Delano Roosevelt 1904, Henry Cabot Lodge ’24, and Linda Greenhouse ’68.

“It is an honor to be chief marshal for the 2011 Harvard Commencement,” Duncan said. “President Obama has challenged America’s young adults to lead the world in college completion by the end of the decade. At Harvard today and at thousands of institutions of higher education this spring, young men and women are celebrating their work toward helping America reach that goal and begin their roles as future leaders of this country.”

Duncan has been active in Harvard affairs since graduating. Along with working on the HAA’s Schools and Scholarships Committee as an alumni interviewer, he has served on the Board of Overseers for Harvard College and on the visiting committee to the University’s Graduate School of Education.

Duncan, who is currently the U.S. secretary of education, recently received Harvard’s Phillips Brooks House Association’s Robert Coles Call of Service Award and has been honored by the Civic Federation of Chicago and the Anti-Defamation League. Prior to his tenure in Washington, Duncan was CEO of Chicago Public Schools, serving from June 2001 through December 2008, thus becoming the nation’s longest-serving big city education superintendent. Before serving as Chicago superintendent, Duncan led a nonprofit foundation, the Ariel Education Initiative, that helped fund college for a class of inner-city children under the I Have a Dream program. In 2006, the City Club of Chicago named him Citizen of the Year.

“We are very pleased that Arne will be leading the alumni at Commencement,” said HAA President Robert “Bob” Bowie Jr. ’73. “He’ll be a wonderful marshal and will surely help make this year’s Commencement a great day.”

Harvard’s 360th Commencement will be held on May 26. To attend the alumni spread luncheon and the annual meeting of the HAA in Harvard Yard.