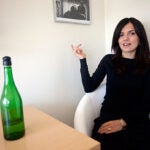 Why the immigrants come

Good policy is made on the ground, Farmer tells HKS graduates

If there’s one thing that graduating Harvard Kennedy School (HKS) students have learned, it’s how to develop good policy. But before heading into government, consulting, and nonprofit work, they received one last lesson from renowned physician and humanitarian Paul Farmer.

What graduates must now learn, Farmer said Wednesday (May 25), is how to work with communities on the ground to solve systemic problems. It’s a process that Farmer, Kolokotrones University Professor of Global Health and Social Medicine at Harvard and co-founder of Partners In Health, calls “accompaniment,” being “present with someone on a journey with a beginning and an end,” no matter how long that journey might take.

“The road from policy development to implementation is usually long and rocky, one that must be trod with companions,” Farmer said in his Commencement address at the John F. Kennedy Jr. Forum.

Drawing on areas ranging from liberation theology to his own experiences with Partners In Health, the international humanitarian organization that works with underserved communities to fight infectious diseases, Farmer cautioned graduates against overvaluing technical knowledge learned in the classroom.

“Expertise alone will not solve the difficult problems that we face today,” Farmer said. The January 2010 earthquake in Haiti, where Farmer, a physician and anthropologist by training, has worked since 1982, provided a “long hard lesson” in the follies of overconfidence.

As Haitians and aid workers alike struggled to regroup after the disaster, “We all wanted to be saved by expertise,” he said. “But we never were.”

What the world’s problems really need, he said, is compassion, understanding, and a willingness to invest in underserved communities, in essence “new rules of the road for foreign assistance.”

After the 2010 earthquake, Farmer noted, Partners In Health found that, of the $2.4 billion of aid distributed afterward, only 1 percent went directly to Haitian authorities. Much of the money went to foreign contractors and international nongovernmental organizations, “which often have disturbingly high overheads,” he added.

“Surely, more could be done to accompany local authorities,” said Farmer, who is also chair of the Department of Global Health and Social Medicine at Harvard Medical School.

He advised graduates to “beware failures of imagination” and avoid “the iron cage of rationality” that would lead them to deem some problems insurmountable. When he began working in Haiti nearly three decades ago, he said, the idea of treating incurable chronic diseases such as tuberculosis and AIDS in resource-poor settings was unthinkable, even “controversial,” he said. But by accompanying individual patients and whole communities — by providing transportation to clinics or starting nutrition projects, for instance — Partners In Health has been able to improve care and reduce suffering.

Traits such as creativity, goodness, and a desire for social justice may not be measurable goods, “but that doesn’t mean we don’t need these traits in public policy and in service of the public good,” Farmer concluded. “Just because we cannot measure the value of accompaniment doesn’t mean it cannot serve as an important notion to guide us forth.”

His point is important for graduates to hear, said HKS Dean David Ellwood afterward, adding that he had been trying to get Farmer to speak at the HKS Commencement for years. “His message always is: ‘Look what you can do, but also look how much more there is to be done,’ ” Ellwood said.

“When you’re at Harvard in the midst of a lot of remarkable people, it’s easy to start thinking you know all the answers,” Ellwood said. “But it’s not just about policy; it’s about implementation.”