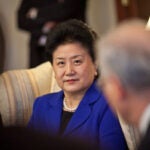 As the euphoria of the successful street revolution in Egypt fades, the country faces the harsh reality of forging a new social contract for governance. Not even the deputy chief justice of the Supreme Constitutional Court of Egypt, who visited Harvard Law School (HLS) Thursday (April 14), could predict with absolute certainty that Egypt will successfully make the transition to a stable, fully participatory democracy.

“For so many years, the average person [in Egypt] never had political ambitions in mind,” said Adel Omar Sherif, who spoke during a panel discussion in Austin Hall on “The Nile Revolution: Constitutional Promises and Challenges,” just a day after Egyptian police detained the country’s former president, Hosni Mubarak, and his two sons. Indeed, the thought of being active in public politics was “even unthinkable,” he said.

Now, however, many have a sense of pride and a belief that a corrupt regime will change, he said. The people were not able to overthrow the Mubarak regime without the army, but “in fact it was a revolution started by the people and then backed by the army,” Sherif said.

Using careful language in a deadpan style befitting a judge, Sherif detailed the various political and military forces at play in Egypt, and expressed concern that current efforts to amend or rewrite the constitution are proceeding without adequate input from the public. The Supreme Council of the Armed Forces, or SCAF, which in effect now runs the country, held a referendum in March over amending the constitution. But then on March 31 the council voided the document and quickly instituted its version of an abbreviated temporary constitution.

A committee formed to draft a new constitution is seen as lacking in public participation, Sherif said. To achieve democracy, “all sectors of society have to work together.”

Three factors have made this a decisive moment in Egyptian history, said Baber Johansen, professor of Islamic religious studies and  director of the Center for Middle Eastern Studies. These are the advent of instantaneous, spontaneous communication, mobility of cultural resources, and the presence of a city stage or public space for people to gather.

“Even if the movement fails, it will be remembered as a decisive moment in history,” Johansen said. “It sets limits on the government’s potential to exclude people from the government. The three elements that have made it so important will not go away.”

A real test of the new free speech, Sherif noted, was whether people have become truly convinced of its value and future leaders allow it. Ominously, a 26-year-old blogger was recently sentenced to three years in prison for criticizing military rulers.

Egypt’s Supreme Constitutional Court, which in previous decades served as a key bastion of liberal legal activism, will likely play a role in determining which recent laws are deemed constitutional in a new political atmosphere. However, it is unclear what constitutes the ultimate legal authority, as several panelists noted. The country’s 1971 constitution has been substantially amended over the decades.

“It seems to me there’s a kind of game going on here,” said Roger Owen, the A.J. Meyer Professor of Middle East History. “In a republic, sovereignty comes from the people, but it’s very possible to manipulate the notion of ‘people.’ ”

Vicki Jackson, the Thurgood Marshall Visiting Professor of Law, noted that in South Africa a constitutional court was charged with determining the constitutionality of the new constitution, after the apartheid system was finally ejected. The result was a successful, relatively nonviolent transition — a process that took four years. It’s difficult in Egypt now because “you’re in a moment where you don’t know where to start,” she said.

Sherif was asked several times about impact of Islamists on any new government and whether there would be increased pressure to enforce Shariah law more widely. Article 2, added to the constitution in the 1980s, makes Shariah the principal source of legislative rules.

Sherif downplayed the impact of Article 2, emphasizing that secular rule of law supersedes religious law. But he said that the court has always had a good relationship with Islamic leaders and they are often consulted on matters of Islamic law. “When it comes to a final decision, the final decision would be by the court, not by the religious institutions,” he said.