‘Turn down the volume’ 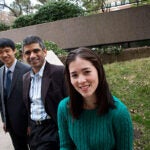 Texting their way to better health

The positive effects of mindfulness meditation on pain and working memory may result from an improved ability to regulate a crucial brain wave called the alpha rhythm. This rhythm is thought to “turn down the volume” on distracting information, which suggests that a key value of meditation may be helping the brain deal with an often overstimulating world.

Researchers from Massachusetts General Hospital (MGH), Harvard Medical School, and the Massachusetts Institute of Technology report that modulation of the alpha rhythm in response to attention-directing cues was faster and significantly more enhanced among study participants who completed an eight-week mindfulness meditation program than in a control group. The study will appear in the journal Brain Research Bulletin and has been released online.

“Mindfulness meditation has been reported to enhance numerous mental abilities, including rapid memory recall,” says Catherine Kerr of the Martinos Center for Biomedical Imaging at MGH and the Osher Research Center at Harvard Medical School (HMS), co-lead author of the report. “Our discovery that mindfulness meditators more quickly adjusted the brain wave that screens out distraction could explain their superior ability to rapidly remember and incorporate new facts.”

Brain cells use particular frequencies, or waves, to regulate the flow of information in much the same way that radio stations broadcast at specific frequencies. One frequency, the alpha rhythm, is particularly active in the cells that process touch, sight, and sound in the brain’s outmost layer, called the cortex, where it helps to suppress irrelevant or distracting sensations and regulate the flow of sensory information between brain regions.

Previous studies have suggested that attention can be used to regulate the alpha rhythm and, in turn, sensory perception. When an individual anticipates a touch, sight, or sound, the focusing of attention toward the expected stimulus induces a lower alpha wave height in cortical cells that would handle the expected sensation, which actually “turns up the volume” of those cells. At the same time the height of the alpha wave in cells that would handle irrelevant or distracting information increases, turning the volume in those regions down. Because mindfulness meditation — in which practitioners direct nonjudgmental attention to their sensations, feelings, and state of mind — has been associated with improved performance on attention-based tasks, the research team decided to investigate whether individuals trained in the practice also exhibited enhanced regulation of the timing and intensity of alpha rhythms.

The study tested 12 healthy volunteers with no previous experience in meditation. Half completed the eight-week Mindfulness-Based Stress Reduction Program developed at the University of Massachusetts. The other half were asked not to engage in any type of meditation during the study period. Using magnetoencephalography (MEG), an imaging technique that detects the location of brain activity with extreme precision, the researchers measured participants’ alpha rhythms before, during, and after the eight-week period. Specifically, they measured alpha rhythms in the brain area that processes signals from the left hand while participants were asked to direct their attention to either their left hand or left foot. Participants’ abilities to adjust the alpha rhythm in cortical cells associated with the hand, depending on where their attention was directed, were recorded during the milliseconds immediately after they received an attention cue.

Although all participants had showed some attention-related alpha rhythm changes at the beginning of the study, at the end of the eight weeks, those who completed the mindfulness meditation training made faster and significantly more pronounced attention-based adjustments to the alpha rhythm than the nonmeditators did.

“This result may explain reports that mindfulness meditation decreases pain perception,” says Kerr. “Enhanced ability to turn the alpha rhythm up or down could give practitioners’ greater ability to regulate pain sensation.”

The study also sheds light on how meditation may affect basic brain function, explains Stephanie Jones of the Martinos Center, co-lead author of the paper. “Given what we know about how alpha waves arise from electrical currents in sensory cortical cells, these data suggest that mindfulness meditation practitioners can use the mind to enhance regulation of currents in targeted cortical cells. The implications extend far beyond meditation and give us clues about possible ways to help people better regulate a brain rhythm that is dysregulated in attention-deficit hyperactivity disorder and other conditions.” Kerr is an instructor in medicine and Jones an instructor in pediatrics at HMS.