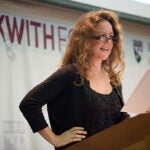 The secret lives of boys

When Stephanie Odle realized she was being paid thousands of dollars less than her male counterparts in the same job, she took up the discrepancy with her boss.

“He has a family to support,” he reportedly told her, “and you don’t.”

Determined to change that practice, Odle, a single mother, sought a lawyer. What began a decade ago with one woman’s fight has become the largest civil rights class action suit in U.S. history, one that accuses Wal-Mart Stores Inc. of discriminating against its female employees over pay and promotions.

Though the case has been upheld as a class action suit in three federal district court decisions, last year the company requested that the U.S. Supreme Court weigh in on the suit. The Supreme Court heard oral arguments last month and is expected to render a decision by the end of June.

Analysts agree that the stakes in the case are high. If the high court allows the case to proceed as a class action, it could cost Wal-Mart $1 billion, while a decision to reverse the earlier rulings could change the playing field for such litigation.

On Tuesday (April 19), Joseph Sellers, an attorney for the more than 1.5 million women employees at Wal-Mart stores cited in the suit, discussed the case during an appearance at Harvard Law School. Investigating the case for more than a year before filing a claim, Sellers and his team interviewed hundreds of female employees. He said they found “remarkably similar accounts” of sex discrimination in the company’s stores nationwide.

When women questioned why they weren’t being promoted, Sellars said, they were told things like, “Men are better managers,” “Women are better off staying home and taking care of their family,” and, “Men are here to make this a career; you are here as sort of a hobby.”

Additionally, unlike most companies that post job vacancies, Wal-Mart had no formal system to announce openings, he said. Instead, it relied on the “tap on the shoulder system,” where managers would directly approach employees they felt were qualified for other positions. Sellers said such “highly discretionary personnel practices” also included the absence of formal criteria for who should be selected for certain positions or pay raises.

Giving managers such latitude with hiring and pay decisions is not itself illegal, said Sellers, who recognized the company has a corporate culture called “the Wal-Mart way.” The problem, he argued, is that the culture was full of gender stereotypes that “portrayed women as less valuable in the workplace than men.”

“Our contention is that the company expected managers to follow its corporate culture. That culture included gender stereotypes, so the managers exercised discretion often in a way that is consistent with those stereotypes.”

Offering insight into the Supreme Court’s proceedings, Sellers described how the justices asked questions during oral arguments as a means of arguing a point to another justice or seeking middle ground.

He recalled that Supreme Court Justice Sonia Sotomayor followed a line of questioning in direct opposition to an earlier decision that she had issued while on a lower court. “I thought she was looking for some middle ground that she could then take back to conference on a certain point.”

According to Sellers, some justices wondered how he could be sure the managers’ decisions were a direct result of the corporate culture and not simply the managers’ own personal biases.

Anticipating the question, Sellers said he supplied the court with an amicus brief, a supporting document compiled by the American Sociological Association containing research to back the claim that “multiple decision makers can be influenced by a strong common culture.” Part of the brief included studies that indicated managers who are given enormous discretion without guidelines “tend to pick people like themselves.”

Asked by a student about the outcome, Sellers acknowledged the Supreme Court almost always agrees to hear a case so as to explain “what should have been done differently” in earlier rulings. But even a reversal of the decision, he said, could include important ground rules indicating how class actions should be determined in future.

“Likely, they will reverse some part of the underlying decision,” he said, “but what they do after that will be interesting.”