The human side of Shariah 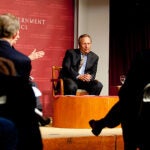 Scholar works with the powerless in navigating Islamic law

The sentence was terrifying, death by stoning.

In 2002, Amina Lawal, a young Nigerian woman, was tried for adultery under Shariah, Islam’s traditional law. She was saved the following year with the help of Hauwa Ibrahim, a Harvard scholar and visiting lecturer on women’s studies and Islamic law at Harvard Divinity School (HDS).

Ibrahim, the first female lawyer among a population of 250,000 in northern Nigeria’s predominantly Muslim Gombe region, used Shariah law to fight the Shariah system, but she also had to battle society.

You have to win these cases in the courts, said Ibrahim, but you also have to “win the hearts and minds of the villagers.”

As a 2008-09 fellow at Harvard’s Radcliffe Institute for Advanced Study, Ibrahim explored the theoretical foundations of Shariah penal code and examined its impact on the legal practices and the human rights of women in West Africa.

Currently she is working on a book telling the story of the Shariah system through the eyes of her clients, the women, children, and men whose lives have been affected by Islamic law. She discussed her new project during a Thursday (April 7) lecture at HDS titled “Humanizing Shariah — A Memoir of the Human Face of a Legal Practice.”

With her new work, Ibrahim said she hopes to convey the importance of common humanity, written in a familiar style with a language accessible to lawyers and laymen alike.

I can do that, said Ibrahim, because “I am an insider, I am a daughter of the soil.”

Calling her own education an accident, Ibrahim said she takes clients on for free because it “is her passion.” While her husband disagrees with much of what she does, he supports her. The problem for so many of her clients, she said, is that they are poor, illiterate, and powerless.

With her new work, Ibrahim said, she hopes to tell their stories, and to shed light on Shariah. In working on the cases, she said she learned that Shariah is never about stoning, flogging, or amputation, but that it is actually “a path to peace.”

“Are there opposing forces against this? Yes, of course … Are there verses in the Koran contradictory? Without a doubt, just like any other religious book. But let me tell you finally I am seeking to do what is right … through Shariah.”