The gifts of immigration 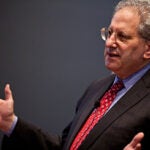 Nearly one of every four Americans — 70 million — is an immigrant or is the child of parents from elsewhere. In Los Angeles, one of every three residents is foreign-born.

The vast majority of U.S. immigration has been nonwhite since 1965, a trend that won’t change anytime soon. So two Harvard researchers asked themselves: What can the past teach us about absorbing today’s immigrants — especially children — in a way that benefits them, and society?

“If they succeed, that is a social good of the first order,” said sociologist Gerhard Sonnert of the young immigrants in the 21st century. “If they do not succeed, it would be bad for America.”

As in the past, immigrants often come to the United States propelled by tragedy. Helping them to prosper is both a practical and a moral imperative, said physicist Gerald Holton.

Holton is the Mallinckrodt Professor of Physics and Professor of the History of Science Emeritus. Sonnert, a sociologist of science, is a research associate at the Harvard College Observatory and an associate in the Physics Department.

The two are champions of practicing science that aims at the social good, a realm they call “Jeffersonian research.” It occupies a scholarly middle ground between the basic research of Isaac Newton and the applied research of Francis Bacon. One approach offers grand ideas, and the other favors applied technology. Holton and Sonnert propose there is a better way to use basic research for the social good.

They wrote two previous books on gender inequality in science. Their two recent volumes focus on the social need to grapple with the facts of immigration.

Holton called modernity’s global flood of immigrants and refugees “an unnatural disaster” for humanity, and the two refer to it as “one of the darkest facts of our time.”

Their first volume on immigration, “What Happened to the Children Who Fled Nazi Persecution” (Palgrave Macmillan, 2006), studied a similar unnatural disaster: the flight to the United States of 30,000 mostly Jewish children from Nazi-dominated Central Europe in the 1930s and 1940s.

It was what Holton and Sonnert call the “second wave” of immigration related to the war. The “first wave” brought in the accomplished adults forced out of Europe, an act of cultural “self-decapitation” by the Germans, the Harvard researchers wrote. Among the escapees were hundreds of luminaries, including Hannah Arendt, Hans Bethe, Albert Einstein, and Walter Gropius.

The second wave, all children, generally turned into American adults who brought extraordinary benefits to their adopted land. After five years of research, including more than 1,500 detailed questionnaires and 100 in-depth interviews, Holton and Sonnert found, for instance, that second-wave youngsters had a 15 times greater chance of appearing in “Who’s Who” compared with their American-born peers. In adulthood, the same children made on average twice as much money, graduated from college at a three-times-higher rate, and were far more likely to enter high-end professions. Among the second-wave were five Nobel Prize winners.

With opportunities found and used in their new country, these immigrant children — despised flotsam to the Nazis — went on to write “an astonishing and a glorious chapter for America,” said Holton.

With this “glorious chapter” in mind, Holton and Sonnert wondered: Could the same advantages to the United States occur with immigrants today?

With help from the Russell Sage Foundation and an anonymous donor, they held a preparatory conference in 2006, from which emerged 20 essays by scholars and practitioners of immigration aid. The essays were collected in “Helping Young Refugees and Immigrants Succeed” (Palgrave Macmillan, 2010), co-edited by Holton and Sonnert.

Many aid organizations help immigrants, and scholars of the field continue a century’s work of studying that. But despite common interests, the practitioners of aid and the academics remain “separate cultures,” said Holton. He called the book an attempt “to bring [them] together fruitfully.”

The essays (including one of their own) touch on lessons from the past, on the primacy of education, on the work of aid organizations, and on research regarding present-day young immigrants.

The stakes are high. Having a rising fraction of young immigrants in the U.S. population makes it a social imperative to provide them with the help they need. Most young immigrants arrive without the cultural capital of their counterparts from Central Europe decades ago. (That kind of capital, said Sonnert, was readily transferable to the Kultur-admiring segments in America.) But the immigrants bring some of the same qualities of spirit to their new country, including pluck, psychological toughness, and the creativity that comes with having to grow up fast under adverse circumstances.

Many young immigrants have faced extreme poverty, danger, and chaotic internment camps, said Holton. They often emerge from these hardships as “instant adults,” he said, just as the children of the second wave did. Young immigrants today also bring something else. It’s what Holton and Sonnert called in their second-wave study “distinctiveness advantage,” the ability of new citizens to retain helpful strengths from their homeland cultures.

It’s a form of creative resistance to the traditional expectation of linear assimilation — the “melting pot” ideal — and is investigated in the book by essayist and immigration scholar Mary C. Waters, Harvard’s M.E. Zukerman Professor of Sociology. These “second-generation advantages,” she wrote, also include exceptional parents and a supportive U.S. civil rights climate.

In sum, these young immigrants bring their own cultural capital, facility in another language, perhaps, or a musical heritage, or a deep-seated admiration for education. Said an admiring Holton, “They don’t come just with a suitcase.”