Texting their way to better health 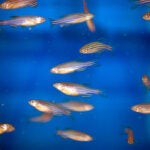 A team of undergraduates from Harvard University, the University of Pennsylvania, and Central Connecticut State University is developing a technology-based solution to one of the most pressing problems plaguing maternal and child health in the developing world: inadequate prenatal and infant care.

Harvard sophomore Annie Ryu and her brother, Alex, a student at Penn, conceived the project last summer when Annie was working in Nicaragua and Alex was working in India with the nonprofit Karuna Trust. Concerned about the issues of poverty and low vaccination rates they saw, they began working on ways to improve the situation.

“One of the main reasons women don’t come to appointments is that they forget,” Annie said.

The two connected with Brandon Liu, a Harvard freshman with a computer science background, and Central Connecticut student David Amenta, who is working with Microsoft on apps for the Windows Phone 7 operating system. The result was Remindavax, a health records system that utilizes a web-based interface linked to a text messaging system. Once it is deployed, rural health workers can enter data about patients so that they automatically receive appointment reminders by text message. While in the field, clinic workers can enter patient data into the records system through a Windows Phone 7 application built primarily to help workers organize and prioritize their work visiting and treating patients without access to the health centers. A few Windows Phone 7s are being provided to workers in a trial.

With Remindavax, health workers can reach poor residents of rural areas where there’s no mail service but where cellphones have become common. With the texted reminders of prenatal visits and vaccination appointments, the group hopes to improve mother and infant health and ultimately to use the reminders to increase adherence to other needed health care services as well.

In search of a faculty adviser for the project, the students approached S.V. Subramanian, associate professor of society, human development, and health. Subramanian was immediately impressed with the students’ plans and their grasp of the significance of the problems involving maternal and child health, an issue that is central to his research.

“We’ve grappled with this for decades,” Subramanian said. “We know that women who are more likely to get care and visit a health center for follow-up care are the ones whose children are more likely to survive. The question is: Can we do something for those women to get them into the clinics? That’s where the technology comes in.”

Once at the clinics, pregnant women, new mothers, and their children would have access to varied services, from counseling about dietary needs to vaccinations to refills of medications.

The students have already drawn some attention. They entered a Microsoft-sponsored technology competition, the Imagine Cup, reaching the U.S. finals and ultimately placing fourth. They’ve also drawn the enthusiastic endorsement of the nonprofit Karuna Trust, which wants to deploy the system in the 27 primary health centers it runs in Karnataka, India.

Liu, who did much of the website development, said he became involved with the project because it was a way to use his programming skills to solve a real problem. While student programmers regularly create new programs, they don’t often get a chance to make a difference, he said.

“I was excited about how it was very, very real and had a social impact,” Liu said.

Annie, who is planning to travel to India with her brother this summer to work on the project, said the participants are designing the program so they can collect data on its effectiveness. That way, if the program works well, organizers will have the information needed to push for expansion. Subramanian agreed that setting the trial up scientifically is essential for it to prove effective enough to move to a larger-scale trial.

“Our aim is to have some pilot data and then do a scaled-up trial. Mobile health, or ‘mHealth,’ is a buzzword in public health and while it clearly has potential to make a difference to real problems, what we lack is evidence,” Subramanian said. “This project is coming out of the students’ passion to make a difference in the lives of women and children in developing countries. Doing so by drawing upon cutting-edge technology and rigorous scientific principles also provides a unique learning opportunity.”