Teachers as part of the solution 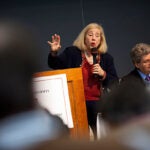 If Randi Weingarten had her way, the teaching profession would look a lot like the National Football League (NFL).

In the NFL, said the president of the American Federation of Teachers, the countless hours spent off the field practicing, training, and reviewing game day tapes are vital to preparing athletes to perform at their best.

“Does anybody really think that football players only work during the period of time that they are on the field?” she asked a crowd at a Harvard Graduate School of Education Askwith Forum on March 31. The same needs to be true for teachers, she said, and unions play a critical role in making that sports model a reality in schools.

During the discussion, Weingarten laid out her organization’s four-point “theory of action” on how to turn the American public school system from an industrial to a knowledge-based model, in which teachers are fully supported.

Quality is a big part of the puzzle. The importance of the union is about “having a voice, it’s about being able to say ‘this is what I need to do my job,’” said Weingarten, adding that unions need to not only support teachers, but also to weed out those who aren’t performing, and to “ensure the quality of the services we deliver.”

While her work includes negotiating working conditions, salaries, and benefits, it also involves examining the preparation, support, and evaluation of teachers, she said. To that end, her organization recently developed a framework for teacher evaluation based on practice and student learning.

Ensuring teaching quality with a successful evaluation system, said Weingarten, is a “lever for change in our school systems.”

School systems also need to address the issue of equity.

“We can’t just say the kids with the least should get the most; we have to actually do something about it.”

For Weingarten, that something involves emulating organizations like the Harlem Children’s Zone, a nonprofit that uses a comprehensive formula for a child’s well-being, including a network of medical, education, and social services.

Accountability is also important, as is a fundamental need for collaboration, she said. When teachers, unions, superintendents, and parents work together, change is possible.

She hailed a New Haven teacher contract of 2009 as a “national model.” The collective bargaining agreement addressed wages and benefits, but also “gave teachers voices in a number of decisions.”

Weingarten offered other examples, including a New York school district that worked with unions to scrutinize spending decisions to avoid layoffs, and one in California where unions and superintendents collaborated on professional development events, parent nights, and anti-bullying campaigns. Across the country, people have been “using this collective bargaining and collaboration model to create problem-solving contracts that bring real reforms to schools and use quality, equity, [and] shared responsibility with collaboration.”

She said “we need to actually follow the evidence,” citing recent studies indicating that more than 83 percent of students in charter schools did worse or no better than their peers in public schools, and reports that merit pay for teachers doesn’t improve student performance.

“We have got to wean ourselves off of the silver bullets, the magic potions. … Let’s actually transform our whole system, let’s actually look and see what works. Let’s figure out if we can actually sustain that, replicate it, and let’s use collective bargaining and the voice of teachers as a mechanism by which we help transform schools.”

Weingarten began the talk with a story about her own days as a teacher. She recalled wearing suits to class and the comments of her students who told her that her polished wardrobe made them feel important.

“It reminded me what kids see in teachers,” she said, adding, “We need to be reminded all the time what we mean to them.”