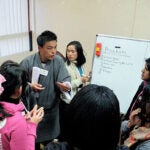 When former Harvard President Lawrence Summers went to Washington in 2009 to lead President Barack Obama’s National Economic Council, some economists were predicting a one-in-three chance of another Great Depression.

Now, with economic collapse averted, a fresh crisis looms: a potential government shutdown. As Democrats and Republicans continue to butt heads over how to balance the 2011 federal budget, Summers jumped into the fray, offering his first public remarks at Harvard since returning to the University in January.

“No one should be rushing to cut government spending or the deficit right now,” Summers said in a wide-ranging discussion at the John F. Kennedy Jr. Forum Tuesday  (April 5). With unemployment near 9 percent, America needs public-sector jobs, he added.

“I don’t subscribe to the ‘sky is falling’ school,” said Summers, Charles W. Eliot University Professor at the Harvard Kennedy School (HKS) and Frank and Denie Weil Director of the Mossavar-Rahmani Center for Business & Government. But just because America is at least a decade away from truly perilous debt, he said, doesn’t mean Washington should avoid the issue of bringing the national debt under control.

“No one can look at the [economic] forecasts out five to 10 years and think that this is a situation that has any high probability of being stable,” he said.

Moderated by David Gergen, director of the Center for Public Leadership at HKS, the evening’s conversation touched on everything from fixing the economy to the future of the American job market to Summers’ presence in not one, but two, Oscar-nominated films in the past year.

Summers was quick to defend the Obama administration’s handling of the economy, including the controversial $787 billion stimulus package that Summers helped to engineer immediately after Obama took office.

“I think the president made the right core choices,” Summers said, agreeing with Obama “that it was better to err on the side of doing too much than of doing too little.”

The administration could have done a better job of getting the housing market back on its feet, he said. His economic team also miscalculated how much support it would be able to rally for the stimulus package. It had hoped it could return to Congress for more money down the road, but popular opinion and a Republican backlash kept that off the table.

“I understand why many people express the concern that the president should show more leadership,” Summers said. But by moving slowly and building consensus on policies behind the scenes, Obama is trying to avoid “putting forward a plan that is more likely to constitute a basis for target practice than for followership” from his political adversaries.

The biggest challenges the American economy faces aren’t rising debt or stagnant business, Summers said, but “increased inequality and decreased opportunity” for the middle class. Even after the economy recovers, one in six men in the United States between the ages of 26 and 54 will remain unemployed, and the gap between America’s wealthiest citizens and everyone else continues to grow.

“The last two years saw the best performance of corporate profits [and] the stock market since the Second World War,” Summers said. The business community needs to realize that, regardless of those indicators, “their long-run success depends upon the success of the broader society.”

While Summers has made a career of moving between academia and politics, there’s one role he appears to be done with: movie star. He was portrayed in the recent Facebook film “The Social Network” and shown in “Inside Job,” a critical documentary on Washington’s response to the financial crisis.

“I liked ‘The Social Network’ better than I liked ‘Inside Job,’ ” he said, eliciting laughter from the audience. In the former film, Summers’ character berates Harvard students Cameron and Tyler Winklevoss for suggesting the beleaguered president intervene in their dispute with Facebook founder Mark Zuckerberg.

Summers was told that the Winklevoss twins claimed the scene was accurate, with the exception that in real life Summers “wasn’t nearly that nice.”

“I have read in one or two places that I can on occasion be arrogant. And if that is so, I probably was on the occasion of my visit with the Winkle-vi,” Summers said, echoing similar remarks he made last month. “But I decided that Harvard’s student discipline procedures were vexed enough without taking a role in intellectual property disputes.”