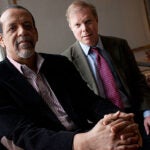 A group of Harvard undergraduates is working to improve leadership skills among middle and high school youth, hoping to instill in them the idea that changing the world doesn’t have to wait until they’re adults — they can start now.

The students are working through the Leadership Institute at Harvard College (LIHC), an undergraduate group, and two subgroups, Yes We Can Lead, which runs weekly workshops at Boston’s Edwards and Gavin middle schools, and Youth Lead the Change!, which took the leadership program on the road in January to the Asian nation of Bhutan, and which is planning a weeklong summer camp for Boston high schoolers in August.

Akansha Tarun, a sophomore and co-founder of Youth Lead the Change!, said the leadership curriculum doesn’t just present concepts to students, it asks them to think of ideas for projects on which they can embark that make a change in their schools or communities.

For example, during January’s trip to Bhutan, Tarun said, one youth wanted to get musical instrument lessons started at his school. To help that happen, they talked not just about the concept, but they broke the idea down into practical steps to bring it to fruition. They talked about identifying teachers or older students who already knew how to play who could act as instructors. They emphasized starting small, with just one or two instruments, and being sensitive to the school administration’s likely concerns about cost. They talked about securing a room for after-school lessons, getting the instruments themselves, and advertising the lessons to the student body.

“We really get kids to identify a need in their community, something they’re passionate about, and help them make that social change project a reality,” Tarun said. “Ultimately, that’s what it comes down to. You start with a vision, but you need to actually implement it.”

LIHC faculty adviser David Ager, a lecturer on sociology, said he has been impressed with the students. The middle school program was founded two years ago by now-senior Emily Harburg, who came to him with the idea for a program. Ager had some contacts at the nonprofit after-school organization Citizen Schools, and he put Harburg in touch with them.

From there, though Ager has offered advice and asked questions, he said the students developed the 10-week leadership curriculum themselves and then adapted it to the culture of Bhutan.

“It was a very powerful experience. They were wonderful diplomats. They were ambassadors for Harvard in Bhutan,” Ager said. “They are a pretty incredible group of students.”

The Harvard undergraduates present the leadership program in the middle schools weekly as part of Citizen Schools’ programs. Recent projects have included a recycling effort, an anti-bullying campaign, discussions on immigration and deportation, and outreach to pen pals in Kenya to raise awareness about child poverty and hunger.

The Bhutan trip happened because six undergraduates involved with the middle school program — Tarun, Harburg, Reid McCann, Sheba Mathew, Ujunwa Anakwenze, and Dalumuzi Mhlanga — felt that the leadership principles that applied to Boston schoolchildren also would apply to teens overseas. The trip came about because of alumni contacts with the government of Bhutan, which had created a youth development fund and was seeking leadership and social engagement programs to help young Bhutanese grow to become good citizens.

The two-week trip required the students to adjust the curriculum, normally offered in shorter sessions over 10 weeks. They not only shifted the timing of the sessions, they also worked to make the curriculum culturally sensitive to their host country, incorporating a meditation period in the mornings. They spent three days teaching the curriculum to teachers and older teens, so they could act as instructors in the future. Later in the trip, both groups taught a group of Bhutanese youth leadership skills, with the sessions furthering the training of teachers even as they imparted skills to the youth.

Though there is some interest in returning to Bhutan next January, Tarun said the group has checked in with instructors in the months since and found that they’ve presented three sessions of the leadership training curriculum so far. If the Bhutan program is self-sustaining, Tarun said, they may not need to return then, and instead may look to another country.

Tarun said the undergraduates involved weren’t just teachers, they learned a lot as well. Each evening they gathered to go over what went right and what went wrong during the day and identified areas for improvement.

“The reflection process was huge because we all were there to be better leaders,” Tarun said.