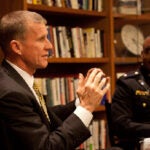 It only took a couple of questions to cut to the chase during a panel discussion on preparedness for national disasters.

“Are we ready today for a really large-scale event, bigger than any of those we have contemplated?” asked Herman “Dutch” Leonard, the George F. Baker Jr. Professor of Public Management and moderator of “Oil Spills, Earthquakes, Tsunamis & Meltdowns: Acting In Time Against the Next Disaster” held on Thursday (April 28) as part of the John F. Kennedy Jr. Forum.

Leonard was not idly posing a hypothetical question. He was querying a panel that included some of the top leaders in American homeland security and the military, including representatives from the National Guard, the Coast Guard, and the Navy. These were the very people responsible for coordinating a national response to a crisis, or as Harvard Kennedy School (HKS) Dean David T. Ellwood put it, “If all of their phones start ringing at the same time, I would say move out of the building quickly.”

A reassuring response came from Craig R. McKinley, chief of the National Guard Bureau and a U.S. Air Force four-star general. “We are much better able to handle a large-scale disaster than we were a decade ago,” McKinley said. This is due to improved communications and cooperation among federal agencies and greater ability to create a unified response to establish command and control systems, he said.

“But it would be naïve of me to say that we could handle an emergency any better than any other government,” McKinley said.

In the wake of Hurricane Katrina and the Gulf oil spill, “the country has learned a lot of lessons,” said Adm. James Winnefeld, head of the U.S. Northern Command and North American Aerospace Defense Command. “We have put together a fairly robust system, a national response framework, a national management system. And if we have a hard time handling a large event in the future, it will be because of capacity, not because of teamwork.”

Bart Stupak, a former Michigan Democratic congressman who chaired the House Subcommittee on Oversight and Investigations, zeroed in on one gap in the nation’s preparedness, the reality that local first responders — firefighters and law enforcement officers  — are not “inter-operative.” That means they lack the technology and structure to communicate with each other rapidly in an emergency.

If you want to save lives, you have to talk, he said. “We have been talking about [this issue] since 1978 in this country, and it’s ridiculous we can’t do [anything]. …With our technology and our telecommunications, there is no excuse for it, other than a lack of will.”

The panel noted that disasters have political and social dimensions that must be incorporated into an overall crisis response. “Any major event is not only a technical event and operational event but also very much a political event,” Leonard noted.

Adm. Robert Papp, commandant of the U.S. Coast Guard, said that when disasters drag out, as in the Gulf oil spill, agencies that initially respond quickly and effectively may become stymied by political and media “overlays.”

“Not all of us are completely comfortable in that world,” he said. “Nor sometimes do we understand all that’s involved in that, particularly on the political side.”

Juliette Kayyem, assistant secretary for intergovernmental affairs in the Department of Homeland Security from 2009 to 2011, who played a key role in the response to the oil spill, noted that responders may be frustrated by politicians who have agendas or who are trying to score points rather than comprehend an overall strategy. But “you’re going to waste a lot of energy if you think it’s going to go away. So one way to think about it is how to manage it.”

Kayyem also said the word “homeland” was a “bad term for a variety of reasons.”

“I really think it’s 50 homelands and a couple of territorial homelands,” she said.  The BP oil spill was “essentially one event but five different engagements.”

In preparing for the future, the country must not only learn from the lessons of 9/11, Katrina, and the Gulf spill, but must prepare for crises as yet unknown, and “something we haven’t thought about,” McKinley said. That is why establishing “pre-need relationships and plans” is key, Papp said.

McKinley warned of complacency and of paralysis at the state and local level caused by a perceived lack of resources.  “We all know that hesitating will cost lives,” he said. “I would caution everybody that we as a nation are going to have to deal with the financial aspects, and we can’t shortchange the response to a major natural or manmade disaster.”

Asked about the role of social media in a disaster, the panelists generally agreed that vital technical information could be effectively disseminated via blogs and websites to help “translate” operational decisions. “What we can’t counter is the reality being set by social media,” Kayyem said. “All you can do is try to get a louder message out there.”

The panel was held in conjunction with the Harvard Kennedy School’s first Homeland Security Executive Program for General and Flag Officers and sponsored by the HKS Executive Education and HKS Program on Crisis Leadership.