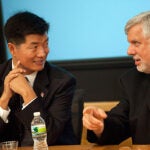 Still flush from mid-term congressional victories and rising influence over budget talks, tea party leaders say they hope to see their movement propel election of their eventual presidential candidate in 2012.

Andrew Hemingway, chairman of the Republican Liberty Caucus of New Hampshire, told a forum hosted by the Institute of Politics (IOP) at the Harvard Kennedy School that he expects the party to be a potent force in the first-in-the-nation Republican presidential primary in the Granite State.

Tea party activists already are holding sway over seats and issues in state politics and helped their own Jack Kimball defeat former Gov. John Sununu for the state Republican Party chairmanship in January. Now, Hemingway said, he is fielding calls from presidential candidates.

“Right now, 50,000 votes wins the presidential primary, and we have that many members in New Hampshire,” Hemingway said. “And we will be getting behind one presidential candidate.”

In contrast, Jenny Beth Martin, national coordinator and co-founder of Tea Party Patriots, said her group does not endorse particular candidates, leaving that for tea party groups in the states. But Martin said she sees the movement’s momentum continuing. She said activists will be evaluating candidates based on whether they adhere to tea party values of “fiscal responsibility, limited government, and free markets.”

“Nobody is excited about one person yet,” Martin said. “It’s all over the board. Everyone is sitting back, waiting,” she said.

Shannon Travis, a CNN political producer and reporter, acknowledged the enormous success of the tea party movement in changing the national conversation to spending cuts and deficit reduction.

“In terms of raw politics, what is going to be more interesting is the fight in the GOP itself,” said Travis, who produced an hour-long documentary on the tea party. When it comes to choosing a Republican standard bearer, “Usually it’s who’s next in line. The tea party is going to blow all that up.”

Kate Zernike, a New York Times political correspondent who wrote “Boiling Mad Inside Tea Party America” and has defended the grassroots origins of the movement, agreed that “given all the energy in the tea party, it has not rallied behind a single candidate.”

The moderator of the forum, Trey Grayson, the IOP director who was defeated in the Kentucky Republican U.S. Senate primary last year by tea partier Rand Paul, said this is a pivotal time for the movement going forward.

“They won, and now they have to govern and run on their record, and how that plays out is going to be one of the most interesting stories in American politics,” Grayson said.

Martin said members of the movement are far from satisfied with the gains thus far, and with the Republican leaders they elected.

“People are so angry still, and right now they are really angry at the Republicans,” said Martin, who is a veteran of Republican politics in Georgia, where she said voters became enraged when Sen. John McCain of Arizona voted for the TARP stimulus legislation just like his presidential foe, Sen. Barack Obama of Illinois.

“People were cutting off the McCain in the McCain-Palin bumper stickers,” she recalled.

The wildfire success of the tea party has been fueled by the deep and long economic downturn that prompted populist frustrations with government leaders for not taking effective action to turn things around for many Americans, Zernike said. But like other political movements in American history, challenges mount over time.

“The knife cuts both ways,” said Travis, addressing Martin and Hemingway. “You — tea party — didn’t get the numbers you wanted in the last budget deal, and your success and tactics give fodder to your critics that you are inflexible, want unrealistic cuts, and those mostly affect poor people and senior citizens.”

Hemingway said, “But this is a movement. We’re not a political party, and we’re not putting out a policy recommendation. That’s for the think tanks like the Heritage Foundation.”