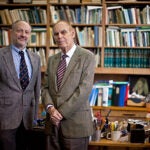 The gifts of immigration

The man elected as the new political leader of the Tibetan government in exile says he overcame voter doubts about his youth and relative inexperience in part due to his political studies at Harvard.

Lobsang Sangay, a Harvard Law School graduate, won 55 percent of the vote in a runoff with two more experienced candidates, Tenzin Namgyal Tethong and Tashi Wangdi, in the final round of voting for the post of Kalon Tripa, or Tibetan prime minister. The results of the voting — which was held beginning in March among Tibetan exiles scattered over 30 countries— was announced in India on Wednesday (April 27).

The election is particularly significant since the Dalai Lama, who has been both the political and religious leader of the Tibetan people in exile, has announced he will retire from political life. The Dalai Lama has led a Tibetan government in exile in Dharamsala, India, formed after he fled Tibet in 1959 following a failed uprising against Chinese rule there.

Two days before his victory was announced, Sangay returned to Harvard for an appearance sponsored by the Fairbank Center for Chinese Studies to discuss his campaign. On Monday (April 25), he regaled his Harvard audience with stories about trekking to remote Tibetan communities to reach voters and amicably sharing meals and long cab rides over excruciatingly bad roads with his two finalist opponents. Tibetan elections are vastly different than those in the United States, he said. Even through 17 debates, “we kept it as positive as it could possibly be.”

Yet Sangay said he broke with longstanding traditions of reticence among Tibetan political candidates. “The standard line was ‘I will not stand for the post, but if people vote me in, then I will serve,’ ” Sangay said. He made it clear he wanted to be Kalon Tripa by visiting Tibetan communities, the only candidate in the preliminary round to do so. “I used what I would call Americanized, Indianized campaign styles. I went to all the Tibetan settlements in India and Europe and the U.S. But then I had to find a middle way. I did not want to be seen as too Indianized and being blamed for being too aggressive, which is not appreciated as well. So even if I lose, I remain a Tibetan.”

His Harvard experience “helped me a lot finding the middle ground.”

Sangay, 43, forthrightly and with self-deprecating humor acknowledged he had faced senior veterans of the Tibetan exile government. “It so happened that I was not only the youngest but the least experienced in the sense I have never worked in the government in exile before, not even a single day.” He even cheerfully showed how his campaign posters were defaced with the misspelled statement, “No exprince.” He had been, however, a leader in the Tibetan Youth Congress as a student in New Delhi.

So, drawing on his Harvard studies, including establishing a personal narrative and offering an expanded definition of the role of the prime minister that went beyond administration, he said he struck a chord among voters.  “The mood was for change, and I tapped into it, and it worked,” he said. It was not that dissimilar from the election of President Obama or even the selection of George W. Bush over Al Gore, he said. About 60 percent of the 110,000 Tibetans eligible to vote cast ballots.

Born in Darjeeling, India, as part of an exile Tibetan community established there after the Chinese takeover in 1950, Sangay completed his studies at Delhi University and came to the United States in 1995. As a Fulbright scholar, he obtained a master’s degree (1996) and a doctorate (2004) from Harvard Law School. Sangay also was a senior research fellow of the East Asian Legal Studies Program and organized seven major conferences among Chinese, Tibetan, Indian, and Western scholars, including meetings between the Dalai Lama and Chinese scholars at Harvard.

Sangay referenced those conferences when asked during an extensive question-and-answer session about his position on the Chinese rule of Tibet, a tense political issue. He said he knew many Chinese scholars personally, and “I believe in dialogue.”

He said he advocates a “middle way,” or autonomy for Tibet within Chinese sovereignty. “That is the Tibetan government’s policy, and if I get elected, I must abide by the policy, and I will do so.”

While he believes the election gives him legitimacy on the world stage as a Tibetan leader in a now-secular government, China is unlikely to recognize his authority; Chinese newspapers have already labeled him as a “terrorist,” he said. He has never been allowed to visit Tibet, although he has visited China.

Sangay expects the Dalai Lama to continue to play a civic role, despite his request to quit public life altogether, saying he expects that role to be one of an “elder statesman.”

“He will always be my spiritual leader. He will always be my source of inspiration,” Sangay said. “So my loyalty and respect for him is very strong. It’s not so much to replace him, but rather to live up to his expectation and fulfill his vision, which is that if I’m elected, I should be the head of the government and become the political face and spokesman for the Tibetan people.”

Asked what he would do in his first 100 days in office, Sangay was quick to note that the “Tibet election doesn’t work this way.” But “the number one priority is always and will always remain to restore freedom in Tibet,” he said. “Domestically, improving education will be my number one priority.”

“It is an honor and a privilege to serve your people and your country,” he said.