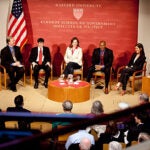 In what is believed to be the largest gathering of uniformed students at the University since Winston Churchill spoke on campus in 1943, more than 170 Harvard veterans from all the service branches gathered at Cambridge’s Sheraton Commander Hotel April 25 for a dinner honoring students who have served in Afghanistan and Iraq. The keynote speaker was retired four-star general Stanley McChrystal (National Security Fellow, Harvard Kennedy School ’97) — “one of America’s greatest warriors,” according to Secretary of Defense Robert Gates.

The event, the third since 2007 held in honor of Harvard veterans, was hosted by the Kennedy School’s Center for Public Leadership.

In her video tribute prepared for the event, President Drew Faust chronicled the University’s history of military service. Harvard students founded a military company in 1769 — seven years before the nation was born. Eleven-thousand Harvard students served in World War I, and 27,000 served in World War II. There have been more Medal of Honor recipients from Harvard than from any other university except the service academies. The evening’s event, she continued, was not only a fitting occasion to celebrate the re-establishment of a formal relationship with ROTC at Harvard (the University welcomed the Navy ROTC program back to campus last month after a hiatus of nearly 40 years), but also to “rededicate ourselves to public service at the University.”

Noting the increased student interest in public service of all types — some 200 Harvard students now serve in the military, applications to Teach for America from Harvard students have tripled from 6 to 18 percent in the past three years, and applications to the Kennedy School’s master’s degree in public policy program have grown 34 percent in the past two years — Faust finished by telling the veterans: “I thank you for your sacrifice, and I proudly honor your service, as indeed we honor it every day.”

In his welcoming remarks, Kennedy School Dean David Ellwood underscored Faust’s commitment to honoring military service. “When I first arrived as a student at Harvard in 1971, we were still engaged in the Vietnam War. Back then too many educated Americans treated veterans with disdain,” he said. “We forgot that while one can always question a particular mission, we must always admire the service and the sacrifice of the men and women who wear the uniform and put their lives on the line for our country. The University in general and the Harvard Kennedy School in particular must stand for the highest ideals of service in all its forms. I am very proud that President Faust has led the charge for a return of ROTC.” Addressing the assembled veterans, he added, “We hope you learn something from us, but we know that you are among our best teachers.”

McChrystal is currently the chairman of the McChrystal Group and a senior fellow at Yale’s Jackson Institute for Global Affairs. He also heads up the White House initiative Joining Forces, which is devoted to promoting awareness of — and alleviating—the stress endured by families of active-duty personnel, reservists, and veterans. When people stop to thank them for being a veteran, he told the gathering, most veterans feel a bit uncomfortable and “think one of two things: I didn’t do that much, and Why wouldn’t I have done that? No one should feel uncomfortable for having served,” he insisted. “And there are more veterans here tonight than those in uniform. When we talk about veterans, we talk about people who’ve made the commitment to give.” No single person deserves all the credit, he added, but every person who does even a little bit has made a contribution.

“Several places in America have a special resonance — people want to know what Harvard thinks,” McChrystal said in closing. “Your willingness to honor veterans has a ripple effect that carries across our society.”

Following a short question-and-answer session, Center for Public Leadership Director David Gergen noted how fitting it was that the event should take place in a venue named in honor of George Washington, who took command of the Continental Army a mere 30 yards from where the hotel is located. Pointing out that McChrystal served in the Army Rangers, Gergen then directed his remarks to the veterans, saying, “Every Ranger promises not to let a fallen comrade fall into the hands of the enemy. I can’t imagine a better way to think not only of what you have done, but what you can be.” You can become the next greatest generation of Americans, he added. “Think of your fellow citizens as the people you can’t leave behind — that’s the promise we think of with you.”

Echoing McChrystal’s retirement address, which quoted Winston Churchill, Gergen concluded: “We make a living by what we get, but we make a life by what we give.”